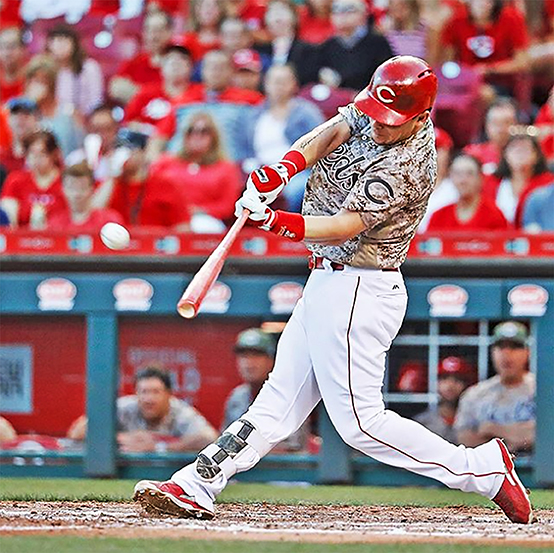 CINCINNATI (AP) — Cleats, pants, jersey, hat. Scooter Gennett peeled off his uniform — the one still dripping from a douse of celebratory ice water — and handed every piece to a clubhouse manager. All of them were headed to Cooperstown.
All so hard to believe.
The diminutive Cincinnati native put on the greatest home run show in franchise history Tuesday night. He tied a major league record with four homers — becoming the 17th player to accomplish the feat — and matched the club mark by driving in 10 runs during a 13-1 victory over the slumping St. Louis Cardinals.
Kluszewski. Robinson. Bench. Perez. Junior. None of them ever hit four in a game.
They can all scooter on down the list.
“It’s surreal, man. It really is,” Gennett said, wearing a backup set of clothes after the others were whisked away. “I’m truly blessed. I’m from here, born here. Watching all those guys play when I was little. And to do something that’s never been done — I can’t put words on it.”
He wasn’t the only one nearly speechless. No major leaguer had ever had five hits, four homers and 10 RBIs in a game, according to the Elias Sports Bureau. Gennett’s 17 total bases also were a team record.
“He had a career night, a great night,” said Adam Wainwright, who gave up Gennett’s second career grand slam. “Guys do that now and then. He almost beat us by himself tonight.”
Gennett was the most unlikely player on the roster to turn into an historic slugger.
The 5-foot-10, 185-pound infielder was claimed off waivers from Milwaukee late in spring training for a utility role. Some seasons, he barely hit four homers at all — he reached double digits only once and had 38 in his career heading into the game.
Four homers? Unthinkable.
Josh Hamilton was the previous player to hit four home runs in one game, for Texas against Baltimore in May 2012. The last National League hitter to do it was Shawn Green for the Los Angeles Dodgers against Milwaukee in 2002.
The 27-year-old Gennett singled his first time up and then homered in four straight at-bats . He joined the Cardinals’ Mark Whiten as the only players with a grand slam among four homers in a game, according to Elias. Whiten did it in 1993 at the Reds’ old riverfront ballpark, driving in 12 runs that stand as the major league record.
“It’s amazing, especially since he’s not an everyday player for us,” manager Bryan Price said. “He’s got power, but four homers in one game? I don’t know what to tell you.
“It’s very emotional. It was an honor to witness that.”
Gennett snapped an 0-for-19 slump during the Reds’ 4-2 win over the Cardinals on Monday. He went 5 for 5 on Tuesday and raised his batting average 32 points to .302.
Gennett got his big night started with an RBI single off Wainwright (6-4), who brought a long scoreless streak into the game but couldn’t handle a team that has hit him like no other. He lasted only 3 2/3 innings and gave up nine runs for just the third time in his career.
The last time? Also against Cincinnati in 2013.
Gennett’s grand slam in his next at-bat was the first Wainwright had allowed since 2012. Gennett then connected for a solo shot and a two-run homer off John Gant.
With the crowd of 18,620 on its feet, Gennett hit a two-run drive in the eighth off John Brebbia for a place in history and his second curtain call.
“I was kind of laughing, to be honest with you,” Gennett said. “For a guy like me to do that is crazy — a little short of a miracle.”
Tim Adleman (4-2) gave up one run — on Stephen Piscotty’s homer — in seven innings, sending the Cardinals to their season-high fifth loss in a row. They’ve dropped eight of 10 overall.
The Reds have won three in a row against the Cardinals for the first time since 2015. They’ve taken nine of their last 14 against St. Louis.
Wainwright’s streak of scoreless innings ended at 17 in the first inning. The right-hander fell to 9-11 career against Cincinnati with a 5.01 ERA.
HOMER HISTORY
Gennett became the seventh player to hit homers in four consecutive at-bats during a game, joining American Leaguers Carlos Delgado, Mike Cameron, Rocky Colavito and Lou Gehrig along with National Leaguers Mike Schmidt and Robert Lowe (1894).
REDS MOVES
The Reds reinstated left-handed reliever Tony Cingrani from the disabled list and optioned right-hander Lisalverto Bonilla to Triple-A Louisville. Cingrani had been sidelined since April 21 with a strained right oblique. Bonilla was 1-3 with a 7.43 ERA in four starts and two relief appearances.
TRAINER’S ROOM
Cardinals: Rookie INF Paul DeJong made his first start at shortstop in place of Aledmys Diaz, who got a day off. DeJong has started eight games at second base, but played both positions in the minors.
Reds: RF Scott Schebler was out of the lineup for the third straight game with a sore left shoulder, but came in on defense after the Reds built their big lead.
UP NEXT
Cardinals: RHP Lance Lynn (4-3) gave up only one run in six innings of a 7-5 win over the Reds at Busch Stadium on April 28. He is 9-4 career against Cincinnati.
Reds: RHP Bronson Arroyo (3-4) is coming off one of the best outings of his comeback season. He allowed two runs in six innings of a 3-2 victory over Atlanta on Friday.