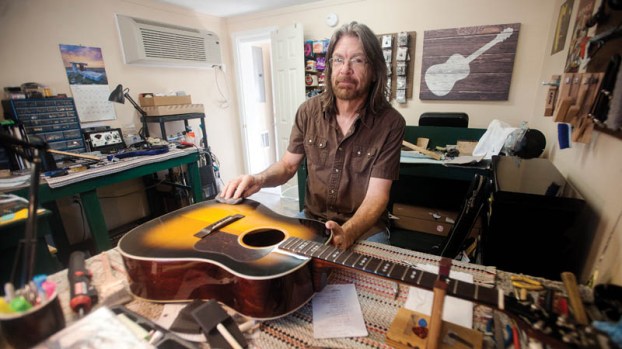 Michael Allen works one a guitar at his shop located in downtown Chesapeake. Allen’s shop, Fix This!, specializes in stringed instrument repair.

CHESAPEAKE — Michael Allen’s instrument repair shop in Chesapeake, Fix This!, has only been open for a few months, but Allen has nearly 40 years of experience working on stringed instruments. Everything from electric guitars to doghouse bass to mandolins have crossed his workbench over the years, and he’s fixed them all.

“I’ve done repairs in the area, starting back in the 80s,” Allen explained. “I did repairs for Pied Piper in Huntington, and worked for them up until right before they went out of business. Then a couple of guys from Pied Piper opened Route 60 Music, up in Barboursville. I divided my time for a while between Mac & Dave’s in Huntington and Route 60 Music in Barboursville. Then went full time at Route 60 Music, and did that until I decided to open my own place here.”

Having his own shop has been a long time dream for Allen, so when the opportunity presented itself, he took it, and opened Fix This! Stringed Instruments Repair at the end of February.

“This is something I’ve wanted to do for a long, long time,” he said. “And a few things came together with money, and this space, and the opportunity and everything just came together.”

Allen can repair everything from broken headstocks to holes in the body of an acoustic instrument to the electronic components of an electric instrument.

“If it’s done properly,” he explained of headstock repairs, “the glue joint is actually stronger than the wood itself. So, if it were to break again, it would probably break in another place.”

While guitars are the most common instruments in his shop, Allen will look at any type of stringed instrument and provide quotes or advice on any type of repair.

“I do guitars, all electric and acoustic, mandolins, banjos, dulcimers, violins. I’ve had big stand-up basses in here. All kinds of stuff,” he said.

Despite not really advertising the new shop much yet, Allen has stayed fairly busy since opening.

“It’s been pretty much Facebook and word of mouth so far,” he explained. But he’s built up a reputation in the music community that has allowed that to be enough.

“I went into this knowing that it would probably take a while, to slowly build, but it’s coming along. Actually, I’m doing better at this point than I thought I would be. I thought I’d be here the first six months to a year, just slowly trickling in. But it’s taken off fairly well.”

The cost of repairs vary, depending on the severity and work involved, but Allen gives an estimate before beginning any work, and advises clients if the cost of repairs would exceed the market value of the instrument being repaired.

“A job like (headstock repair),” he explained, “they don’t all break the same. Some are more difficult than others. That can range anywhere from… I’ve fixed broken headstocks for under $100, and some of them are as much as twice that. It just depends on the difficulty of the job, and the amount of time and labor spent on it.”

Other people have had stuff repaired because of nostalgic reasons or because it’s something that has been handed down, and they don’t really care how much it costs, they want it fixed and they want to keep it in the family.”

Pier blasted Wednesday, others today The old Ironton-Russell Bridge will soon be just a memory, as the last remaining piers... read more