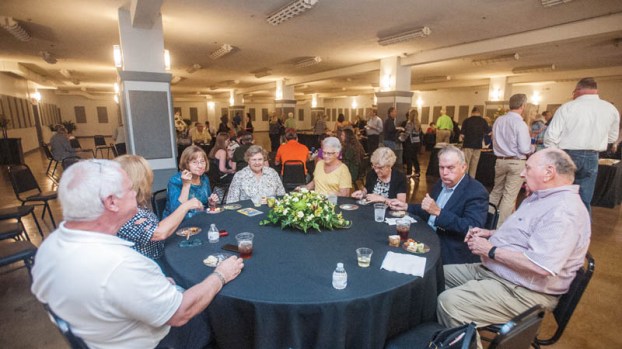 Visitors gather inside the newly remodeled event room, located at the Highland Museum and Discovery Center, during business after hours.

ASHLAND — The Highlands Museum and Discovery Center hosted a ribbon cutting Thursday evening to unveil its fourth floor, which has been remodeled into a conference center, followed by a business after hours event.

“We needed an area for large events and conferences, which we didn’t have,” Carol Allen, executive director of the museum, said. “This can handle conventions and other large events that come to town, as well as our own large museum events that we do for fundraising.”

She said that her vision was to be able to bring more conferences and events to Ashland, and that became a reality with the opening of the fourth floor.

“The entire idea for remodeling this stemmed from us consistently renting out our main hall on the first floor,” Matt Potter, director of operations at the museum, said. “With having to rent that out as frequently as we were, we were constantly tearing down and setting up our exhibits almost every week, which also took away from the exhibits themselves in sometimes not being the caliber that we would have liked them to be.”

From the time it was decided to convert the fourth floor into a conference center until completion, Potter said the process took about 16 months.

“We basically self-funded the whole project, with the exception of $30,000 from the city of Ashland’s coal severance fund, which covered the HVAC system,” Potter said.

The space can also be rented out for private events, with a wedding already scheduled at the location for July.

Following the ribbon cutting on Thursday, the museum hosted a business after hours in the space, which was catered by the Kentucky Hall of Fame Café.

The Ohio River Sweep is an annual cleanup for the Ohio River and its tributaries. The event encompasses more than... read more