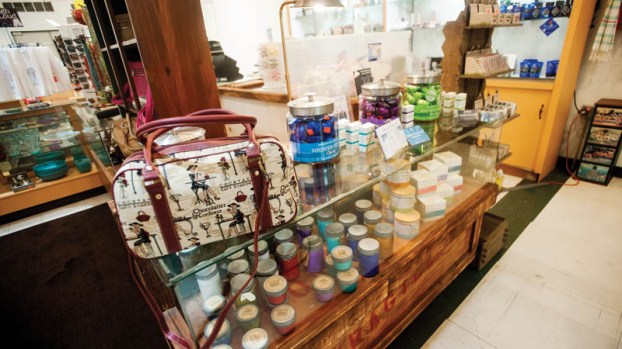 More than just one note

For more than five decades, Dick’s Music Shop has been a fixture in Ironton.

It has served generations of musicians, from kids learning piano or guitar to piano players who need sheet music to rockers looking for cool gear. But it has expanded beyond just music since the opening of the Downtown Emporium.

Dick Rice opened the store in 1959. Rowena Mollett and her husband, Paul, bought the business in 2009.

Rowena Mollett was teaching at the federal prison in Ashland and was facing mandatory retirement in 2012, so she was looking something else to do.

She wanted the music shop so she could get back into music herself.

“I went to church with the Rices and periodically I would ask Mr. Rice when he was going to sell me the music store,” Mollett said. “I said it one day and he said ‘Let’s talk.’”

They moved the shop from the 1600 block of Third Street to its current location at 119 Third St.

“We decided we wanted a downtown location,” Mollett said. “We liked the location and we didn’t have to do a lot to the building itself.”

She added “We thought and hoped it would be a great location and it has been.”

And there was a lot of room for expanding.

Looking around the shop, she decided to change the interior and add more than music-related items, since there is a lot of room in the building.

That’s why, in the back there is not only a Fed Ex shipping counter, but also a boutique.

“We started out with just the music shop out front, but then we revamped this area and added the gift shop, because we wanted something where people could come and buy a gift you normally couldn’t buy in town,” Mollett said. “We’ve lost all our retail downtown and people think they have to go to Ashland or Russell to get a gift. We wanted to create a shop where you can get things you can’t get over there.”

“It’s a mixture. We are constantly adding things,” she said. “With the name ‘emporium’ you know you get a nice variety.”

The pack and ship was added “because people had to cross the Ohio River to send a package,” Mollett said. “Now, we have it here in town. I have people coming all the way from West Portsmouth.”

Even with the expanded businesses, the core of Dick’s Music Shop remains music.

They sell just about any kind of musical instrument or accessory.

“And if we don’t have it, we can order it,” Mollett said. “We also repair instruments.”

And they teach people to play just about any instrument, from drums to guitar to piano.

“It’s rewarding to see these kids come in and get lessons and see what they do,” Mollett said. “Music programs in schools aren’t what they used to be. We need a place where kids can come and get the musical training so they are ready for the future. It’s something they are going to carry into their adult lives.”

Although one of the most popular classes is currently the ukulele.

“Ukulele is big,” she said. “I think its because it is a fun little instrument, it’s joyful, and it is very easy to play,” Mollett said. “It doesn’t have complex chords. Some of them are one string; some of them are two strings.And you can learn it very quickly.”