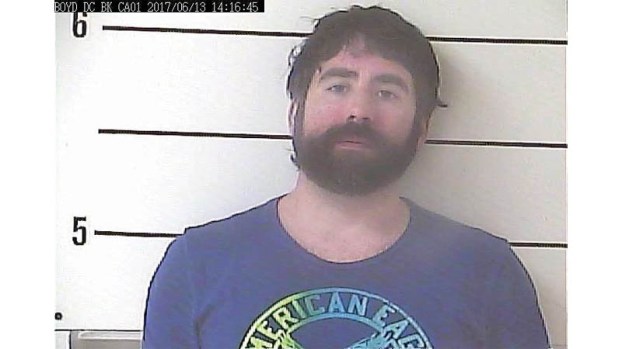 A West Virginia doctor arrested in Ironton last month was arrested a second time on Tuesday afternoon for not returning to jail.

Dr. Marc J. Spelar, 35, who has a business in Milton, West Virginia called Prometheus Mentis Psych PLLC, and his girlfriend, Melissa H. Jones, 39, of Ashland, were arrested on May 17 after complaints about the two not vacating an Ironton hotel room after a required check out time. The hotel employees also said they smelled marijuana smoke.

When Ironton Police arrived at the hotel to remove the two for criminal trespassing, they found drugs, drug paraphernalia, and needles and spoons and arrested the pair. The two were taken to the Lawrence County Jail. That night, Spelar was assaulted by another inmate and was hospitalized. He was released on a medical own recognizance bond and was required to turn himself back into the jail after he recovered.

“We started an intense manhunt for Dr. Spelar because he failed to turn himself into the Lawrence County Jail,” said Ironton Police Interim Chief Joe Ross.

The Ironton Police heard that Spelar was practicing medicine again and were in Milton, West Virginia on Tuesday morning for several hours staking out Prometheus Mentis Psych PLLC with the West Virginia State Police to see if they could take him back into custody.

Ross and another detective got a tip that Spelar might be at an address in Boyd County, Kentucky and left Milton to see if they could find him.

“We went to an address in Catlettsburg, out on Mesa Drive where Jones’ mother was staying,” Ross said.

The detectives saw Spelar’s Ford Mustang at the home and called for assistance from the Boyd County Sheriff’s Department, who came out and arrested Spelar and transported him to the Boyd County Detention Center.

Spelar will have an extradition hearing on Thursday about transferring him from Kentucky back to Ohio. Ross said if Spelar waives extradition he will be back in Ohio to face charges from the hotel arrest on 14 counts including possession of drugs, trafficking in drugs, and child endangerment.

Ross said he doesn’t know if any charges are going to be filed in West Virginia against Spelar in relation to his practice in Milton.