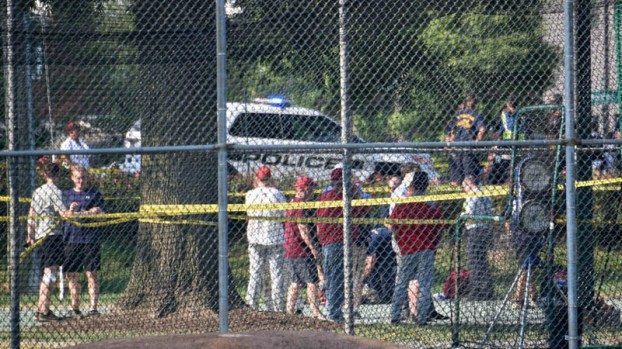 Policemen work at the site of the gunshot at Eugene Simpson Stadium Park in Alexandria, Virginia, on June 14, 2017. Steve Scalise, a U.S. House Republican leader, was among possibly five people shot by a gunman Wednesday morning as he was playing baseball game with other congressmen and aides. The suspect who opened fire in the baseball game practice field in Alexandria, Virginia, was in custody, said Alexandria police. (Yin Bogu/Xinhua/Zuma Press)

Johnson’s office said he was was among the Republican House members taking part in a baseball practice in nearby Alexandria, Virginia on Wednesday where a gunman opened fire, wounding U.S. Rep Steve Scalise, R-Louisiana, and four others.

Scalise, who was shot in the hip, was taken to surgery and is expected to recover, House Speaker Paul Ryan, R-Wisconsin, said.

Johnson had left the practice, for a charity game against Democrats, about five to ten minutes before the shooting began, Ben Keeler, his communications director, said.

Johnson shared his account on social media following the attack.

“Please join me in praying for those shot at baseball practice this morning,” he said on Twitter shortly after the incident. “Major thank you to the Capitol olice officers who were there. I am on the team but left prior to the shooting to head to the office. I am unharmed.”

Johnson also posted a statement on his Facebook page.

“As we pray for those who were shot and injured early this morning at the Congressional Republican baseball practice, I am deeply thankful for the two brave Capitol Police officers – two heroes — who were there at the field, neutralized the shooter, and prevented a massacre,” he said. “ I play in this annual charity event to raise money for various children’s charities, and I appreciate so much the notes of prayers and well wishes I received from many of you on this very difficult day.”

Government officials have identified the shooter as James T. Hodgkinson, 66, of Belleville, Illinois.

Since Scalise was in House leadership, Capitol police had a security presence at the game. Officers fatally shot the suspect during the attack.

Hodgkinson had served as one of the thousands of local level volunteers of U.S. Sen. Bernie Sanders, I-Vermont, during his presidential campaign in 2016. The shooter’s social media accounts had a history of posts attacking Republicans.

Court records show that Hodgkinson had a history of legal trouble, starting in the 1990s with arrests for resisting police and drunken driving. His most serious problems apparently came in 2006, when he was arrested on a battery charge. Records indicate he has not been involved in any legal cases since 2011.

Johnson called Scalise one of his closest friends in Congress. Keeler said the congressman had provided witness statements to police regarding his time at the field before the attack.

“Congressional police believe he may have seen the shooter before the attack,” Keeler said. “Though he didn’t know it at the time.”

U.S. Sen. Sherrod Brown, D-Ohio, spoke about the shooting during his weekly conference call with reporters on Wednesday.

Before speaking on his planned topic of prescription drug legislation, Brown took the time to thank Capitol police for their actions at the field.

“They put their lives on the line,” Brown said of officers. “Too often, we have incidents surrounding the Capitol when something like this happens.”

Brown said the officers protect not just officeholders like himself, but staff members and visitors to the Capitol.

“I pray for Rep. Scalise and the staff of Rep. Williams,” Brown said of those injured in the attack.

Wednesday’s practice was for a charity game, which was set for Thursday, in which proceeds were to go to children’s charities. The games, which pit Republicans against their Democratic counterparts, are a tradition in Washington.

Keeler said Johnson has played in the games for six years, and that Thursday’s event would continue as planned.

Brown, who said he has taken part in the games as well,  said Wednesday’s shooting should serve as a reminder for those on both sides of the aisle to come together.

“We must work together,” the senator said. “These are people who love their country.”

This week’s shooting is the second attack on a member of Congress in the past decade.

U.S. Rep. Gabrielle Giffords, D-Arizona, was shot in the head in 2011 when gunman Jared Lee Loughner attacked her “Congress on Your Corner” meet-and-greet event with the public.

Six people were killed in the attack and 19 were injured. Giffords, who has recovered some her ability to speak and walk, resigned from Congress to concentrate on her recuperation. She and her husband, Mark Kelly, a retired American astronaut, have worked as activists to push for stronger gun control laws.

Brown said the shooting should not deter representatives and senators from meeting with the public.

“It’s my job to get out to the people,” Brown said, citing Abraham Lincoln, who said officials needed to take “a public opinion bath” and hear from their constituents.
“I will continue to go out in public,” he said. “We should always do that.”

“Jane and I send our thoughts & prayers to Steve Scalise, the Capitol police and all those affected this morning,” Portman said on Twitter on Wednesday. “The Capitol police put their lives on the line every day to protect the public and members of Congress. They are true heroes.”

Sanders, upon being told the shooter had volunteered for his campaign last year, issued a statement condemning the attack.

“I am sickened by this despicable act,” Sanders said. “Let me be as clear as I can be. Violence of any kind is unacceptable in our society and I condemn this action in the strongest possible terms. Real change can only come about through nonviolent action, and anything else runs against our most deeply held American values.”

He also shared his hope for those injured.

“My hopes and prayers are that Representative Scalise, congressional staff and the Capitol Police Officers who were wounded make a quick and full recovery,” Sanders said. “I also want to thank the Capitol Police for their heroic actions to prevent further harm.”

President Donald Trump called for unity after the shooting.

Trump said in a televised statement from the White House that while the political parties may have their differences, it’s worth remembering that everyone who serves in Washington is here because they love the United States.

Trump said everyone can agree that we are “blessed to be Americans” and that we are strongest when “we work together for the common good.”

— The Associated Press contributed to this report