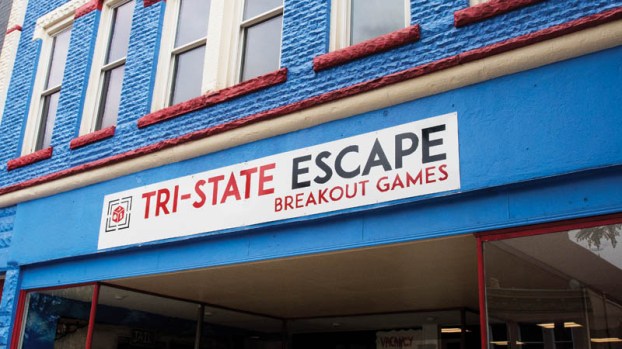 The area’s newest escape rooms, Tri-State Escape, is set to open on Friday evening. It features three themed rooms with a series of puzzles and clues to find to escape.

Ashland is getting it’s own escape room.

Tri-State Escape is opening this weekend in the former Ashland News Stand building across from the Paramount Arts Center on Winchester Avenue.

The business is being opened up by several family members who really enjoyed the escape rooms and thought there should be one in Ashland.

“We really enjoy them so much and we would laugh and have fun and had a really great bonding experience,” said one of the owners, Megan Pigman. “So we thought it would be really cool to bring that to Ashland. And we thought Ashland could really benefit from that type of entertainment option.”

An escape room is where a group of people are put in a locked room and then have to find and figure out a series of clues to escape. Although, for safety reasons, people aren’t really locked in the rooms.

“It’s a live action adventure,” Pigman said. “So instead of playing a video game, you are actually in the adventure yourself. You have one hour to solve a series of puzzles and clues, crack codes, that sort of thing, to escape from the room. It’s a really fun experience, especially for those who’ve never done it before.”

Pigman said that although there are other escape rooms in the area, it isn’t always about being a competitive market rather the players like taking different friends to challenge the rooms.

“If people love escape rooms, they are going to find other ones in the area to play,” she said. “It’s not really a case of one escape room competing against another. It’s good for the whole escape game market when another one opens.”

Pigman said most of the owners live in the Ashland area; Debra Miller lives in Ironton and Daryl Adkins lives in Greenup and is a teacher and coach at Greenup High School.

“Ashland is sort of the center for all of six owners,” she said. Pigman and her boyfriend, Morgan Adkins, live in central Kentucky so they have been coming in on weekends to help the family get Tri-State Escape up and running.

Pigman said the old newsstand building is a great building for the new business.

“There is a lot of room,” she said. “We’re starting off with three rooms.”

One room has a creepy hotel theme called “Room 13.” A second one has a pirate theme and is called “Captain’s Curse,” where the players are on a pirate ship.

They had a soft opening last weekend and Pigman said people really enjoyed them.

They are finishing up a third room which is a western-themed jail break. It should be finished this week or next.

Pigman said that they plan on changing up the rooms as time goes on.

“We are going to have a seasonal Halloween one. We’re still brainstorming that one,” she said. “We also want to do a kid’s room, we’ve had a lot of requests for that. With the current rooms, kids wouldn’t be able to understand the clues well enough to solve them. We want to be able to bring the children in as well so they can enjoy it too.”
Pigman said they will likely add more rooms once they get the three rooms going.

“We’ll probably put in a comment box in the lobby so people can tell us what they would like to see,” Pigman said. “We will eventually switch those out to keep things exciting.”

Tri-State Escape will have a ribbon cutting at 6 p.m. on Friday.

It is located at 1327 Winchester Avenue in Ashland.

Taste of Ironton set for June 24

Ironton aLive event now in its third year The best food Ironton has to offer will be on display at... read more