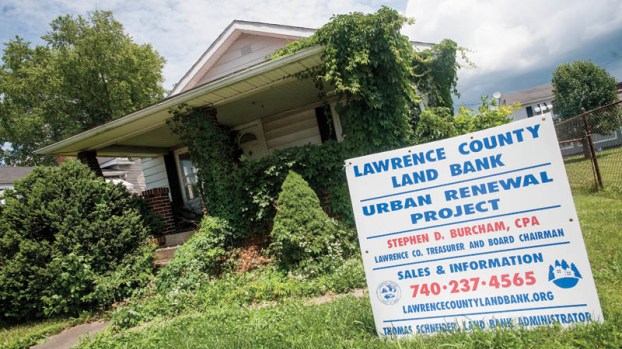 This property, located along South Fourth in Ironton, is one of many land sites on the Lawrence County Land Bank list.

Proposed uses of lots, other mitigating factors could be considered for reselling lots

The Lawrence County Land Reutilization Corporation Board moved on Thursday morning to set minimum bids for lots they have cleared and prepared for resale.

The new minimum bids are set at $5,000 on buildable lots, and $3,500 for non-buildable lots. These figures will be used as the beginning minimum bid on all future sales, however, the land bank does have the flexibility to work outside those rules for special situations, or to accept a lower bid on a parcel if the bidder’s proposed use is considered a more desirable use of the land. For instance, building a new home on a lot would generally be considered a more desirable use than simply extending a property line.

“This gives us an idea of where they need to be,” explained board chairman Stephen Burcham.

He explained that landlocked properties, especially, may not adhere to these policies based on the difficulty involved in marketing them.

These totals are based on the average expenses to bring a property to market. On average, the costs to bring a buildable lot to market come to $4,250.01.

This includes $230 in preliminary judicial report (PJR) costs, $300 for a title search, $150 in advertising, $100 for final judicial report (FJR) costs, $240 for marketing, and a 50 cent title transfer fee, plus $3,229.51 in operating expenses, based on splitting yearly operating costs for the office over 50 properties.

The PJR includes a listing of any potential lienholders on the property, while the FJR includes listings of any lienholders who have or have not replied.

In old business, the board approved a bid from Aaron Heighton on parcel # 34-025-0200.000. Heighton revised his bid on a small vacant lot adjoining the Social Security Administration parking lot that Heighton would like to use as a private parking space for his mother-in-law, based on the board stipulation that it would have to be paved with asphalt to match the adjoining lots.

Though Heighton’s revised bid of $2,000 was below the new minimum of $3,500 for non-buildable lots set earlier in the meeting, Burcham emphasized that it was a “small non-buildable lot” that was unlikely to generate any further interest and that the board’s requirement that Heighton pave the lot with asphalt “goes toward improving the area.”

He also noted that the $2,000 bid does still cover the organization’s fixed costs, even if it is below the new minimum.

In addition, the bidder’s proposed use, of extending his yard across the alley, is not the preferred use for the property.

The board said the fact that the lot was separated from the bidder’s property by an alley made the yard extension use problematic, but also that they would prefer to see the property redeveloped with another home, rather than maintained as a vacant lot.

Future contract award dates were also tentatively set, with August 25 set for the next round of asbestos control bids. The next round of demolition bids could come as soon as the end of July, Schneider explained, but those bids are dependent on the turn around time for asbestos inspections and what is found during those inspections.

If asbestos is found, it must be abated before the property can be safely demolished.

County Commissioner DeAnna Holliday asked about the possibility of utilizing contractors and labor native to Lawrence County, and encouraging those contractors from West Virginia and Kentucky who do bid to hire local labor.

He said that, as momentum picked up on acquisition and demolition, he expected more local contractors to become involved.

However, many contractors try to schedule their projects months in advance, to avoid down time between projects. Because of this, he said, many of them were simply unavailable for the quick turn around time needed on these early demolitions.

“We need to put bids out earlier, so contractors can schedule their bids,” Burcham said.

He also explained that there is only one contractor in Lawrence County qualified to do asbestos inspections, but that his facility is not large enough to do the level of testing they are required to perform, and would have to work with outside laboratories to do so.

The land bank also announced that the round of demolitions planned for June 19 has now been pushed back at least a week, to a tentative date of June 26, based on the timetable surrounding proper inspections.

New business requires problem solving to have fun Ashland is getting it’s own escape room. Tri-State Escape is opening this... read more