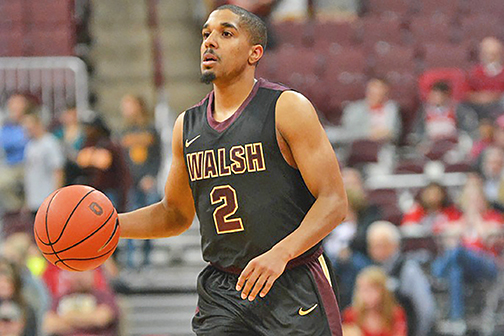 Most people don’t like to hear the word “no.” Zac Carter lives to hear it.
At 5-foot-9 and 150 pounds soaking wet, Carter doesn’t look like a formidable basketball player. But don’t go by how he looks. Instead, go by what you see.
It’s when Carter starts to play he quiets any critics or doubters.
“All my life people have told me I can’t do it and that’s what motivates me,” said Carter. “When people say I can’t do something it lights a fire in me.”
The motivation has worked.
Carter was a four-year starter at Ironton High School and not only had success but became the program’s all-time leading scorer. A first-team All-Ohio selection, he helped lead Ironton to the 2013 Division III state tournament.
Carter’s success continued the past four years at Walsh University when people continued to say he would never be able to play at the college level.
Not only did he play at the college level, he is going to get a chance at the professional level after signing a contract to play in the Iceland Premier League.
Iceland has a population of just 330, 823 and Carter reports on Sept. 1 to the city of Borgarnes with a population of 1,887.
“I don’t know a lot about Iceland. The highest the temperature gets is 65 but it’s real beautiful,” said Carter.
The winter temperatures average a high of 36 and a low of 27. Carter said that won’t be much of a problem.
“If I’m not in the gym at practice or games, I’ll be inside,” said Carter with a laugh.
Carter said that coaches and former players who went to Walsh introduced Carter to various agents. The standout guard selection an agent with good connections and sifted through offers from several teams before selecting the most conducive for him.
“Signing was like a weight lifted off my shoulders,” said Carter. “The league is a good starting league for my (pro) career). I feel I’ll do well in it, my agent feels I would do well and some friends said I’d do well.
“I’ll go for a year and come back in the summer and go through a re-evaluation process. Then I can see if I have more offers and I’ll sit down with my parents and my agent and make a decision. It could be Turkey, it could be China, it could be Iceland.”
Having a good college career helped Carter reach this point, especially his senior year when he had his best season.
Carter was named to the Great Lakes Intercollegiate Athletic Conference first team last season as he averaged 24.6 points and game — good enough for third in the nation for Division II and 11th regardless of division.
The point average was also the highest for a Cavaliers player since Walsh Wall of Famer Nick Pallotta averaged 25.7 in 1965-66 and third behind Pallotta who also averaged 34.3 in 1964-65.
Carter — who eclipsed 1,000 points in his career — was 137-of-154 from the foul line for 89 percent and ranked second in the conference as Walsh finished the season 16-11.
But Carter deflected any praise thrown his way. He said it was a team effort that he enjoyed so much success.
“I think I had a great career but it wouldn’t have been what it was without my coaches, my trainer, my teammates and everyone in and out of the athletic department who helped me,” said Carter.
“The people I’ve met at Walsh, the (head) coach (Jeff Young), they’ve helped me and made me a better person and a better player. They were open to help you with whatever you needed. Whether it was school or sports, they were open to help you.”
Carter also thanked former Ironton standout Ty Barnes who was instrumental in his early development. Barnes played a year professionally in Australia.
“Ty Barnes taught me a lot of things. Ty Barnes is a big part of my success. I would have learned some things, but he taught me early. The Barnes family has been a second family to me. They’re not just basketball people but just real, good people. Ty has been a mentor to me. He’s always open to working with you,” said Carter.
Even with all the help, it was Carter’s work ethic and love of the game that helped him obtain such lofty success and provide him with an opportunity to play at the professional level.
“I knew coming into this year I had to have a good year if I wanted to continue. I knew I had to put in the work and if it didn’t work out, then I would have no regrets,” said Carter
“It’s a blessing I get to do what I love to do every day and I get paid for it. I’ve put my whole life into this and worked my tail off. It’s a testament to my hard work.”
How can you say “no” to that?

Dodson will take a swing at Rio Grande