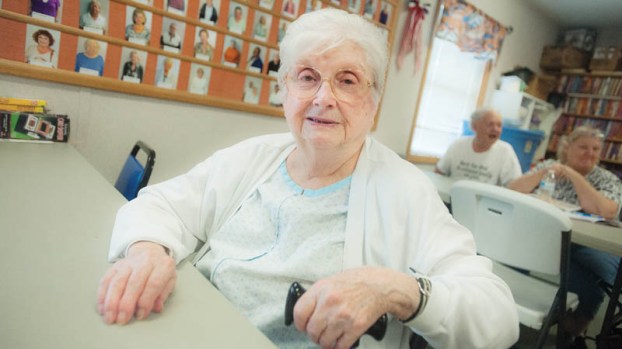 Opal Cecil, of Chesapeake, was named as the 2017 Senior of the Year by the board of the Sybene-Chesapeake Senior Center at the Lawrence County Senior Day event this spring.

CHESAPEAKE — If you ask anyone about Opal Cecil, of Chesapeake, they’ll tell you she is an amazing cook.

Members of the Sybene-Chesapeake Senior Center all cited the desserts she regularly makes for the facility’s events, when discussing her contributions to the center.

Cecil was named as the 2017 Senior of the Year at the group’s annual Senior Day at the Lawrence County Fairgrounds this spring.

“Opal is one of those people, where, when she walks in, everybody says ‘Opal is in the house!’” Green said. “She’s very faithful, and she’s been coming here since we started the Sybene Senior Center about three and a half years ago.”

Donna McClure, of the center’s board, also praised her.

“She really enjoys coming to the senior center,” she said. “She brings cakes for us, and they’re always so good.”

Cecil, who is the widow of Colbert Cecil and has two sons and a daughter, spoke of her experience at the center.

“People are always so nice, friendly and helpful,” she said on Friday, during the center’s Father’s Day luncheon. “They’re a nice bunch of people to be with.”

She ran a restaurant for 13 years and, during World War II, worked for the Sylvania electronics company.

“She was one of the local Rosie the Riveters,” her son, Robert, said of his mother’s experience there. “They worked on government contracts.”

He said, due to the secrecy of the war effort, Sylvania workers would assemble portions of larger items needed, but were not told of their full use.

Friday’s luncheon, which featured sub sandwiches from the Walmart deli, is one of the last events the center will host at its current location, a modular unit on the grounds of the Chesapeake Senior Center.

They are set to move to the first floor of the newly-constructed Proctor’s Landing senior living apartments in Rome Township, across from the Lawrence County Fairgrounds.

Green said a specific date has not been set, but the move will come in the next few weeks. She said details will, hopefully be confirmed next week. With the move, the name of the organization will change to the Proctorville Senior Center, she said.

Green said they were honored at Friday’s lunch, where she presented each of them with mini shopping carts.

“They can use them when they use a laundromat on the same floor,” she said. “And they can get groceries back to their room with them.”

Until the move, the center will continue with its regular Monday, Wednesday and Friday hours of operation in Chesapeake, Green said, which includes a Wednesday Bible study at 10:45 a.m.

On June 30, the center will host its monthly “Our Day” dinner at First Baptist Church in Proctorville, featuring food and entertainment, which is open to the public. Entertainment begins at 11 a.m. and food is served after.

Proposed uses of lots, other mitigating factors could be considered for reselling lots The Lawrence County Land Reutilization Corporation Board... read more