Dodson will take a swing at Rio Grande 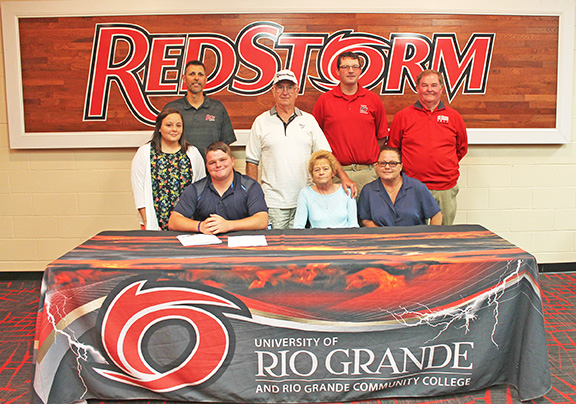 RIO GRANDE — When looking for a golfer to emulate, a lot of boys would think Jordan Spieth, Tiger Woods or Dustin Johnson.
Chandler Dodson looked toward….his grandparents?
Dodson said his biggest influences introducing him to the game of golf were grandparents Peanut and Wayne Dodson.
“My grandparents used to take me golfing. I’d say I was nine or 10 when I picked up a golf club. I’d walk right beside them when they played,” said Dodson.
Their influence paid off for the former Ironton Fighting Tigers golfer who signed to play with the University of Rio Grande RedStorm.
“Ever since I started playing I wanted to play college golf. I’ve put in the work the past four years and I wanted to keep playing,” he said.
Dodson was All-Ohio Valley Conference the past two years and was an Academic All-Ohio selection his senior season.
Ironton coach A.J. McKnight said Dodson’s best years are ahead of him and he has faith the newest RedStorm player has the tools to succeed.
“Chandler is a great kid and a hard worker who loves golf,” said McKnight.
“With his length off the tee and work ethic, he has a lot of growth potential.”
Rio Grande brought back its golf program and new coach Keith Wilson has been filling his roster.
“I’m really excited,” said Dodson. “I believe it’s going to be fun and I think I’ll have some good teammates. (Wilson) is just looking for me to be a good golfer.”
Dodson actually entertain thoughts of playing college baseball at Pikeville. His cousin Wayne Sparks pitched for Alice Lloyd and was always there to provide help and encouragement.
“I used to do both. I’d play in the little league baseball and make sure I played at least a round of golf each week. Wayne is my cousin and he helped me a lot,” said Dodson.
A key reason Dodson turned to Rio Grande was its nursing program. He plans to make nursing his major.
“I love learning about the medical profession. I’m looking into maybe going to medical school,” said Dodson.

CINCINNATI (AP) — Everything is working for Alex Wood these days, leaving him among the Dodgers’ greats for the best... read more