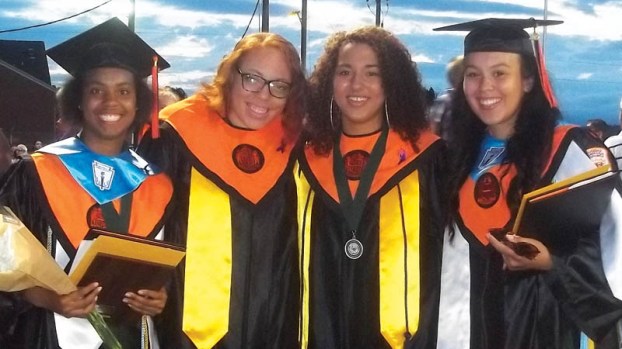 Kara Spencer, far left, was the recipient of The Frances Washington Memorial Scholarship, which was presented on the Ironton High School field on graduation night by the Progressive Women’s Civic Club. The group also gave educational gifts to three applicants Zakia Lee, second from left, D’Layne Keith, and Payton Arden.

The Frances Washington Memorial Scholarship was presented on the Ironton High School field on graduation night by Scholarship co-chairs Andrea Preston and Angela Pleasant, of the Progressive Women’s Civic Club.

The group extends well wishes for them as they strive to continue their education, and want to thank donors and all those who helped to make this possible.

The group also hosted its raffle drawing on May 26 at the Ironton City Center.

The group would like to thank the three donors and all who supported the raffle, which helps fund the Frances Washington Memorial Scholarship.

The Progressive Women’s Civic Club was founded by Frances Washington and has been active in the community for decades with the mission “to promote interracial justice, understanding and peace among all people” to raise the standard of the home and “advance the moral, economic, religious and social welfare of the family.”

The annual scholarship is named in her honor.

Attorney says Trump not under investigation