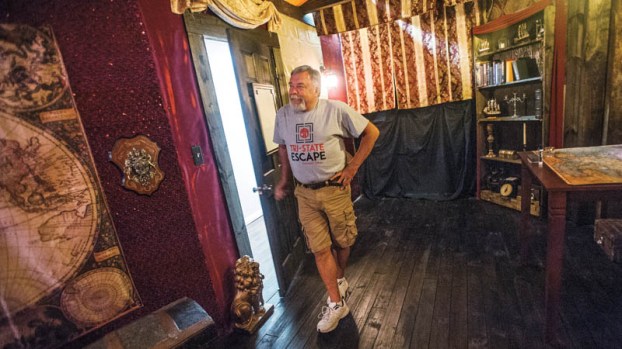 ASHLAND — A new business opened its doors on Friday in Ashland.

Owners of the Tri-State Escape room hosted a ribbon cutting and reception in the evening, prior to the first regular bookings of the Winchester Avenue venue.

The venue locks guests in themed rooms and, through teamwork and puzzle solving, they use clues to “escape” the facility.

She said bookings for the half hour sessions have been strong so far.

“Every slot has players coming,” she said.

She said they will also take bookings outside of regular hours, as they did a few days prior to the opening for a youth group.

They were from Pennsylvania and were just coming through town.

“And it’s a really great opportunity for team building,” she said. “Local businesses should check us out.”

Darrell Adkins gave a tour of some of the rooms. The first featured a series of benches and shackles, made up to look like the lower decks of an old ship.

He said another room is set up to resemble “a creepy motel room.”

He showed a few of the clues for the rooms.

“There are numbers and maps, and lots of stuff that moves,” he said.

In the back is the nerve center, where staff watch the guests’ progress on a video display and interact with them.

Two city commissioners were present at the ribbon cutting for the business, one of which was Marty Gute, who offered a few words.

“We’re tickled to death to have you here,” he said to the owners. “When I was growing up, this was always the Ashland Newsstand. It’s laid empty for a while. Then we saw you painting it and things going up. We congratulate you.”

Pigman said those interested in booking a slot for the rooms can visit the website at www.tristateescaperoom.com or call 606-498-9094.