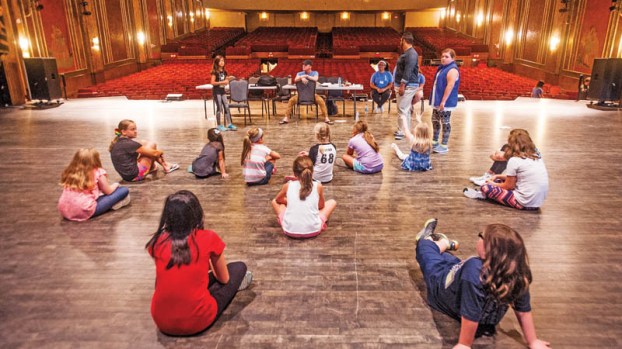 ASHLAND — School may be out for the summer, but children throughout the Tri-State have a chance to continue their education during the summer months.

“We’re doing three weeks of camps,” Melanie Cornelison-Jannotte, the Paramount’s arts director, said. “They’re open to preschool to age 18 and we cover all the arts disciplines.”

The camps are structured in three sets of one-week courses, offered through July.

In addition, the offerings will include the option of a two-week production camp in theater.

“It explores every aspect, from auditioning, to casting, to scripts,” Cornelison-Jannotte said. “They do two, full solid weeks of rehearsal.”

The production will culminate in a performance of “Annie Jr.” at 7 p.m. on July 22.

“It free and open to the public,” she said.

She said the sessions are structured in half–day courses.

“People can come in the morning and learn dance, then learn about jewelry making I the afternoon,” she said. “Or they can just take a morning or afternoon session.”

Upstairs, Shawn Terry, of South Point, was teaching hip-hop dance to a group of about 15 students, ranging in age from five to eight years old.

Terry, who is known in Tri-State schools for his “Beat the Bullies” organization and presentations, is a repeat instructor at the camps and is offering dance classes to various age levels.

In the basement, Jamie Nance, a first-time instructor of the camps, was teaching “Reach for the Sky,” a combination of astronomy and arts and crafts.

“They do art projects based off of the sky,” Nance, of Greenup, said. “Right now, we’re doing paper planes.

Nance, who has been involved in arts for some time and has taken part in Paramount events in the past, said students will also study the constellations, the Zodiac, and work on glow in the dark projects.

On the theater’s main stage, Vic Payne and Wyatt Wheeler were teaching about 15 children in Acting A-Z, having the students do their best impression of swimming fish as part of the introduction to acting.

“They offer this one almost every year,” Hannah Tussey, a 2017 Ironton High School graduate who has been involved in Paramount productions for several years, said. “It’s a great place to start acting.”

Tussey, who was giving The Tribune a tour of the camps, said she would be teaching jewelry-making and tie-dye this summer.

“It’s made me think about going to into teaching,” she said.

Cornelison-Jannotte said the Paramount will still be taking sign-ups for the later camps until their first day of classes. She also said the arts center has a limited amount of scholarships and financial aid available.

“We want to try to make sure everyone has the opportunity,” she said, adding that those who are seeking the aid should contact her at the Paramount’s main number.

In addition to summer camps, the Paramount  Players will put on a performance of “All Shook Up,” set for July 28-30, themed around the music of Elvis Presley.

“Most of the songs in the show are his,” Cornelison-Jannotte said of the local production.

Tussey said a good deal of the cast doubles as instructors at the camps, rehearsing after classes end.

Cornelison-Jannotte said those interested in the set of camps can go the Paramount’s website at www.paramountartscenter.com or call 606-324-0007.