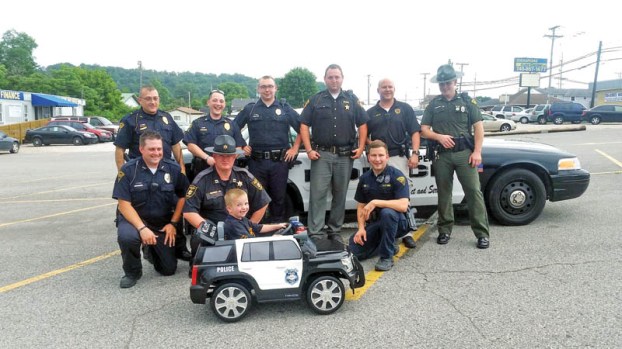 Members of law enforcement from across the Tri-State met with Cashton Keeney, 4, who will be undergoing his third testing for open heart surgery in Cincinnati today. Keeney told his mother he wanted to meet police and become friends with them.

CHESAPEAKE — Cashton Keeney, 4, saw Chesapeake police officers on duty and told his mother that he wanted to meet them.

“He said he wanted to be friends with them and wanted to be a cop,” Randy Lewis, the village’s interim police chief, said.

The boy’s mother took him over to meet Sgt. Eric Morgan.

“They spent about an hour playing and had lots of fun,” Lewis said.

Keeney is set to have testing for his third open heart surgery at Cincinnati Children’s Medical Hospital today.

“You meet him, you love this kid,” Lewis said. “He’s always smiling.”

Before Keeney left for the hospital, Lewis scheduled an event to give him a sendoff and help fulfill his wish.

Law enforcement members from across the Tri-State assembled at Chesapeake Plaza Sunday evening to meet the boy.

“There was us,” Lewis said. “And people from the Lawrence County Sheriff’s Office, the Wayne County Sheriff, the Huntington K-9 unit, Proctorville police and West Virginia State Police.”

Officers talked to Keeney and his family and gave him a chance to check out their cruisers, then presented him with a cruiser of his own, a battery operated model, as well as a Chesapeake Police Department shirt, made for him by Joe Webb of Big Eagle in the village.

Keeney got to play catch with Huntington Police Departments K-9 and was made a special deputy by the Wayne County Sheriffs Office.

“He was very happy to say the least,” Lewis said of the event, which was posted on the department’s Facebook page. “I think the pictures speak for themselves.”

Lewis said that Keeney’s family is accepting donations to help pay for his medical needs. Anyone interested in donating can stop by the Chesapeake Police Department.

Summer camps under way at Paramount Arts Center ASHLAND — School may be out for the summer, but children throughout... read more