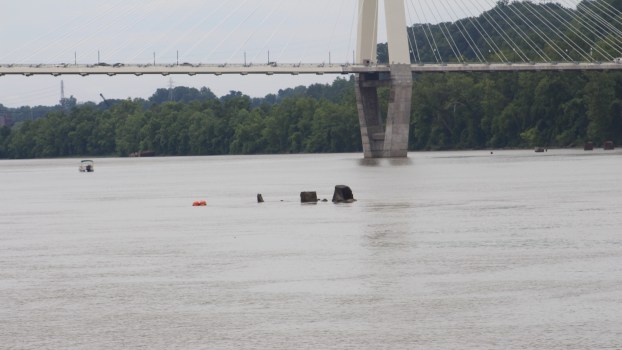 ODOT photo The remains of the concrete piers of the old Ironton-Russell bridge were demolished on Thursday.

A final blast on Thursday morning took down the remaining portion of the old Ironton-Russell bridge.

“Basically, this was a detonation of the three remaining below water portions of the concrete piers,” Kathleen Fuller, public information officer for the Ohio Department of Transportation, said. “This is it. We’re done.”

The above-water sections of the piers were detonated on July 7.

Fuller said this was the last phase of demolition of the old bridge.

The main span was cut loose and lowered by crane in January and the anchor arms were detonated and dropped to the river in May.

Fuller said crews from Brayman Construction, who built the new Oakley C. Collins Memorial Bridge and are handling demolition of the old bridge, will work in coming weeks to remove the remaining concrete and debris from the river.

“They’ll get that finished pretty quickly,” she said.

She said the company is coordinating with the U.S. Coast Guard and that she does not anticipate any major impact on river traffic.

As for the new bridge, Fuller said there was some minor work, such as painting and installing of doors in the Ohio tower, that still needed to be finished, though this would not cause any disruption of vehicle traffic.

Fuller said all work on both the new bridge and removal of debris from the old bridge should be finished by the end of summer.

The city of Ironton has announced that, that due to a water line break associated with the demolition of the... read more