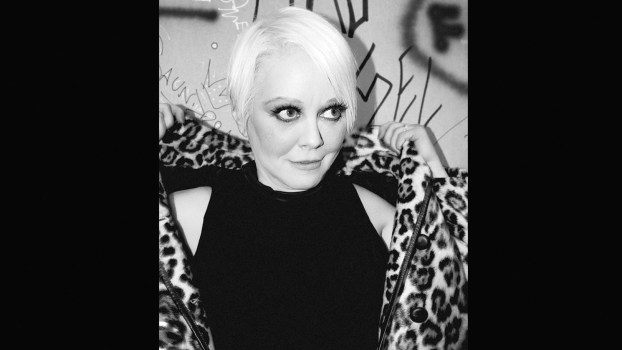 submitted Cindy Wilson, vocalist for the B-52s, will perform at the V Club in Huntington on Thursday as part of the tour for her upcoming solo album.

HUNTINGTON — With 40 years in the legendary band The B-52s on her resume, Cindy Wilson is no stranger to either the studio or the road.

The Athens, Georgia group burst onto the scene in the late 1970s. Their new wave, dance and retro 60s songs and their self-titled debut quickly won them a cult following and many admirers, including John Lennon, who cited the group as a favorite shortly before his death.
Wider success came to the group in 1989, when they hit the top 5 of the charts with “Love Shack” and “Roam” from the multi-platinum album “Cosmic Thing.”

The group is celebrating their milestone anniversary this year with a major tour, and, in between those dates, Wilson, known for her vocal harmonies with Kate Pierson, is branching out on her own for a series of live shows, one of which is scheduled for Thursday at the V Club in Huntington.

Wilson said her decision to finally release a solo album came after she and a friend, Ryan Monohan, had decided to go into a studio “and just kick things around.”

She said the recordings came following a time of stress in her life.

“Music is a great healing,” Wilson said. “I’ve always loved to do music. It’s been a way to get through hard times.”

The two had been working on different projects in Athens and Atlanta, prior to recording, she said.

“We decided just to see how we’d do in the studio — if we could work together,” Wilson said. “We found it to be a very easy working situation.

We went to Suni Lyons, who is really an exceptional engineer and producer. He has a wonderful studio just outside of Athens.”

She said the recordings, which began about three years ago, came naturally.

“It was a good way and an outlet to just get outside myself and be creative,” she said. “We had the best time, and so we would meet about once a month at the beginning. We found a sound we liked.”

She said the group worked to come up with a distinctive sound to flow through the tracks and give the project its aural personality.

“Every song would sound the same,” she said. “It wouldn’t sound like different styles for each song. We had a continuity there we were building.”

Releasing the work proved to be a bit of a challenge, she said.

“I didn’t realize, being from the old school, how difficult it is putting out music these days,” Wilson said. “We had to start all over even though I had a little bit of a name. I had to prove myself and our new solo entity, the band.”

She described the projects, which lean more toward electronic than her regular band, as “pleasing listening.”

“It’s a little harder sound, and we’re trying to do danceable songs mixed in there as well,” she said.

Wilson said fans can get a preview of the album from this month’s solo shows, in which she said the setlist is designed for songs to function as part of a greater whole.

“I love the way the show turned out,” she said. “It kind of starts from the beginning and flows to the end. You can hold your applause until the end of the show. It’s kind of art-like. Very arty. When we’re working in his studio, Suny designed a lot of the flow of the show.”

Wilson is the third of the B-52s vocalists to try a solo project, following Pierson and Fred Schneider, but she said it wasn’t due to feeling intimidated.

“I’m used to being on stage by this point and I’m pretty brave,” she said. “And, to tell you the truth, I’m used to everything — being accepted and not being accepted. The B-52s are loved and sometimes not loved. As an artist, you always have to take that chance. It’s good fun. I’d be more scared if the material and the people weren’t so strong.”

While she has written with the B-52s, she said the solo songwriting process “has been like school” for her.

“I have a collaborator and they’re bringing songs,” she said. “I’ve learned a lot about singing in different ways and different studio techniques. I love the way it turned out.”

She said the project has given her a chance to explore themes on a different path from her longtime band.

“I feel like B-52s songs hold up because of their originality,” she said. “I think the solo stuff is very modern, it feels to me. I’m loving that, and it’s a chance to step out and do new things. I did nothing wrong singing “Rock Lobster” and different songs with the B-52s, but it is also really wonderful to do new things.”

Wilson will perform at the V Club at 8 p.m. Thursday. Tickets are $15. A meet and greet event will be held before the show. Tickets are $35.
For more information, visit www.CindyWilson.com.