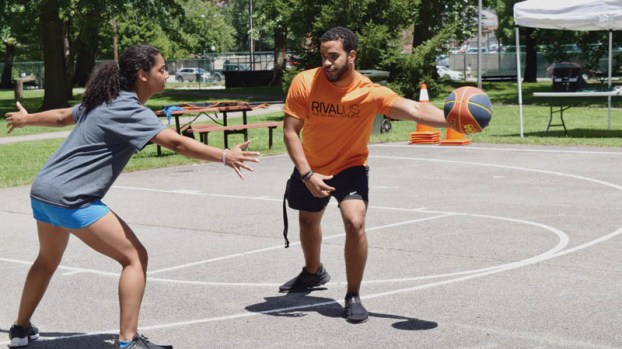 Cheyenne Scott, of Ashland, and Richard Crockrell, of Ironton, take part in the CCCR’S basketball tournament in Central Park in Ashland on Tuesday.

ASHLAND — Charles Scott, of Ashland, says that “competition brings out the best in everyone.”

He is putting that theory into practice this week as his company CCCR’S (an acronym for his children’s name and pronounced “Caesar’s”) sponsors a basketball skills challenge and dunk contest at Central Park in Ashland.

Scott said his company works with children from all over the Tri-State.

“We mentor them in sports, academics and the arts,” he said. “The main goal is to get them to be the best version of themselves that they can be.”

When not running the part-time organization, Scott said he works with Head Start students as his regular job.

About 20 turned out to compete on Tuesday, the second day of the tournament, which is broken down into age brackets through Friday, followed by a championship event on Saturday, he said.

The final event will coincide with the kickoff of Ashland’s annual Summer Motion festivities this weekend, he said.

Scott said there is a $200 grand prize for each category in the tournament, which includes 3-point shootout, an obstacle course and dunk contest.

“Someone could make up to $600 if they won each category,” he said.

Scott said a DJ is planned for the championship game, set for Saturday from 10 a.m.-12:45 p.m., and will also feature a visit from Kenny “Sky” Walker, a former player for the University of Kentucky and the New York Knicks, as well as musician Gerardo, who, since moving to the region, serves as the head pastor of House of Grace in Ashland.

For more information, visit www.ccrsllc.com  and CCCR’s LLC on Facebook.

Give the people what they want