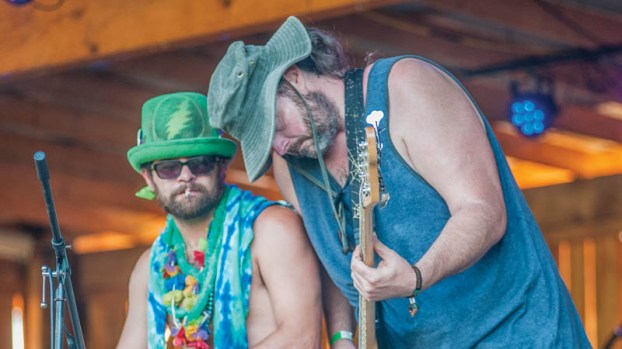 KITTS HILL — The second annual ValStock music and arts festival kicked off Friday at Green Dragon Farms near Kitts Hill, and the first bands were playing and vendors were set up as attendees began to filter in.

“We have three bands playing this evening,” Cayela Sherman, who was working the gate, said of the opening line-up, which consisted of Hyewater, Feeding the Bears and The Kind Thieve. “We’ll have 20 altogether.”

Bands set to perform are returning artists String Therapy, Let’s be Leonard, of New York, and Qiet!, as well as Axis, The Recipe, Creek Don’t Rise and the Sour Mash String Band.

Sherman, the daughter of Homer Jenkins, who owns the farm, located on County Road 19, said the event will run through Wednesday.

“We want to see local people come out and see all the local artists who are cropping up in the area,” she said.

The festival is named in honor of Homer’s wife, Valerie Jenkins, who died in an auto accident near the farm in 2015. Originally her idea, the event is now named in her honor and her ashes are interred near the stage.

Throughout the grounds, the first arrivals were setting up campsites for the weekend, as well as vendor tents.

One of those was “Dottie the Psychic,” of Ravenswood, West Virginia, who was offering card readings and selling dreamcatchers.

“This is my first time here, and my second time anywhere,” she said. “I figured if I made enough here, I could make it into a legitimate business.”

Another was GetYourRocksOff.shop, an online business from Flatwoods, Kentucky.

“We’re selling natural gemstone jewelry, and some essential oils, A Beth Jones, who was running the booth, said.

They were also featuring T-shirts, designed by artists Trinity Jones and Harley Cook, who accompanied her. The pair creates novelty designs under the name @diogi.ohana.

The vendor who had traveled the most distance to set up was likely Angel Tattoos, from Indiana.

The proprietor, “Breeze,” said it was her first visit.

“I found out about it on Facebook,” she said, stating that, in addition to tattoos, she was offering piercing.

“We’re health department-inspected, certified and licensed,” she said, noting that she arrived Tuesday to get things squared away with local agencies.

Other attractions included a planned glass blower, a barn jam by GVNG Records each night apart from the main stage and a fireworks show on Tuesday night for the Fourth of July, Sherman said.

She said, if all goes well, the festival will continue annually.

“We’ll do it again next year, if my dad lets us,” Sherman said.

More information on the festival can be found on the Green Dragon Farms website at www.greendragonfarms.org or on Facebook at https://www.facebook.com/GDragonFarms/.