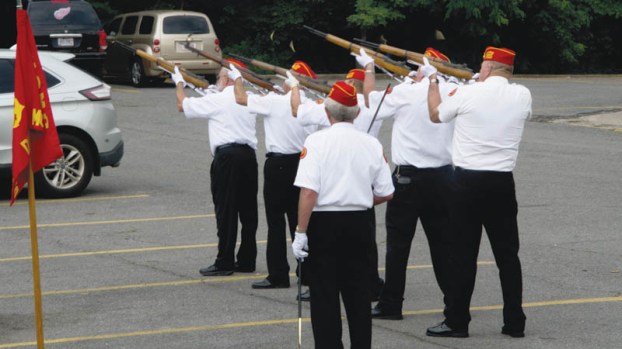 Members of the Huntington detachment 340 of the Marine Corps League fire in salute to Theodore “Tuc” Church.

SOUTH POINT — Theodore “Tuc” Church, a Lawrence County resident who was killed in action in Iraq, was honored on Wednesday with a ceremony at Glockner South Point Ford.

A plaque, bearing his name and photo and detailing his service, was unveiled at the dealership’s flagpole, following a gathering attended by  Church’s family and members of the Huntington-based Detachment 340 of the Marine Corps League.

After earning his flight wings, he served with the Air Calvary as an aerial observer.

The position put him in close proximity to enemy positions, without cover, while flying in an OH-58D helicopter, Roger Estep, VAVS sergeant with the Marine Corps League, said during the ceremony.

Church had completed two tours of duty and was looking forward to returning to his wife and children, following his third, when he was shot down on May 28, 2007, over Iraq, he said.

Tim Glockner, owner of the dealership, said his grandfather started the tradition of the flagpoles by erecting one at the family’s Portsmouth dealership.

“So we, my dad, my brother and I, followed suit and erected poles at each of our five locations,” he said.

In addition to the Marine Corps League, Wednesday’s ceremony was attended by Hershel “Woody” Williams, a Medal of Honor recipient from Barboursville, West Virginia, and Timothy Hill, a retired general.

“They say life is precious,” Hill said. “But what makes life precious is what you do with it. Tuc is an example of that.”

Church’s widow, Mindi Newell, was in attendance, along with his daughter, Maryn, and son, Dorian.

The family joined Hill in removing the veil for the plaque.

“I’m humbled to realize people still care,” Newell said. “I’m humbled by the turnout and the effort put forth.”

She said she still remembered when she had to break to the children the news of their father’s fate.

“I remember the day I had to tell the kids he had been killed,” she said. “From the beginning, I had told them he was over there to help children and mothers.”

Estep said displays like the one at Glockner are important, as a reminder of the cost of conflicts.

“People will remember when they see these flags that a service man was killed in battle,” he said. “They’re the reason we have the freedoms we have. Those who serve give everything.”