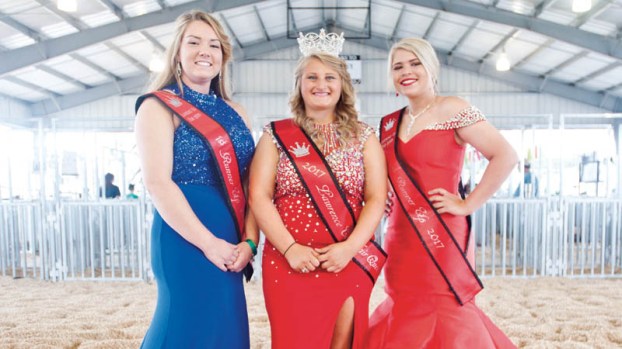 ROME TOWNSHIP — An opening ceremony kicked off the 2017 Lawrence County Fair on Sunday, as crowds came to see the animals, ride the attractions and partake in the fun.

People gathered under the main barn to begin the festivities, where the fair princess and queen were crowned.

Randy Lambert, chair of the fair board, welcomed those in attendance, which included several officials.

Juli Stephens, from the office of U.S. Rep. Bill Johnson, R-Ohio, was on hand for the opening of the fair.

“This is always my favorite fair to attend,” she said, noting that it took place in her hometown.

Lambert thanked them all for their backing.

“We could not have this fair without county support,” he said. “They recognize this as a community and a youth project.”

Lambert also thanked the sponsors of the fair, including one of their newest, Riverside Recovery Services, of South Point, who were represented by executive director Amy Smart and site manager Cathy Ross.

The ceremony also took time to recognize those involved with the fair who have passed, including Chesapeake Police officer Aaron Christian, who died from injuries in a cruiser crash last fall. A new officer to the village’s force, he worked security at the fair in 2016.

This year’s preparations for the fair took place under the shadow of the passing of Lambert’s father, Don, a longtime supporter of 4-H and the event, who died last weekend at the age of 86.

Once the speakers were finished, the contestants for this year’s fair queen and princess filed into the ring, some having to pick up the trains of their gowns as they walked through the sawdust, as the winners were to be selected.

On hand were Morgan Harper and Abigail Patterson, queen and princess from the previous fair, who were ready to help crown their successors.

This year’s princess was Maddy Calaway, who will be a junior at Symmes Valley High School this fall. She is the daughter of Rob and Carrie Calaway and secretary of the Getaway Go-Getters 4-H Club.

“It feels amazing,” she said. “I was very surprised.”

And crowned as the fair’s queen was Matison Klaiber, who will be a senior at Symmes Valley. She is the daughter of Matthew and Lee Ann Klaiber, serves as president of FFA at her school and is a member of the Gingham & Denim 4-H Club.

“It’s great,” she said of winning. I was here last year and was the first runner-up.”

The fair runs through Saturday with a daily admission of $10. Parking is $5 per car and rides are free with paid admission.