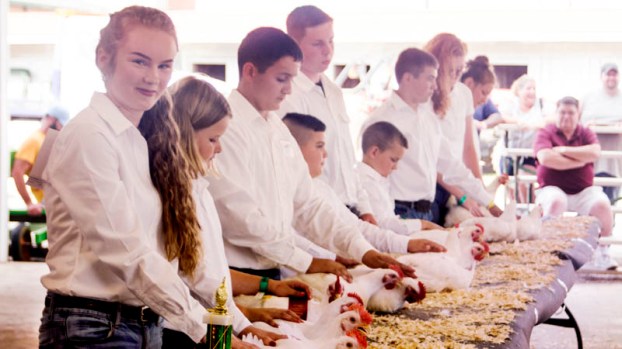 Lailih Holbrook, of Proctorville, and a member of the Scottown Farmer and Farmerettes, won grand champion in the market chickens and won the showmanship category Saturday night at the Lawrence County Fair.

ROME TOWNSHIP — So what makes a chicken good enough to win an award?

Well, it depends if it’s a market chicken or a fancy one. On Saturday night at the Lawrence County Fair, 4-H kids brought their chicken projects to be judged.

The market chickens were judged based on how much meat they had on them.

Beth Barnett, a 4-H committee member, explained that the market chickens are also judged in pairs.

“You want a matched pair, so you look at the cuts of meat on the chicken,” she said. “When you feel the two chickens, you shouldn’t be able to tell them apart. You want a nice, meaty breast because that is the main cut, that’s where the money is. Then you want nice firm legs.”

The Grand Champion winner was Lailih Holbrook, of Proctorville and a member of the Scottown Farmer and Farmerettes, was surprised to win in the market chickens category.

“This was my first year,” she said, adding she hasn’t had a 4-H project before. “I can’t believe I actually got it. I was really surprised.”

She also won in the showmanship category.

“I’ve been doing it for so long, and a lot of the kids were new this year,” he said. “So it wasn’t that surprising.

The fancy poultry was judged on the chicken’s appearance.

Tim Humpreys, a livestock committee member, said the chickens are purebreds and just for show. There were different breeds being judged at the same time but not against each other but against established standards for their particular breed.

“There is a standard of perfection for all poultry breeds and the judges are judging based on how closely they conform to those standards,” he said. “There is a book that has been around for a hundred years or more and each breed has a specific standard to meet with weight and feathering.”

Noah Hessler, of Scottown and a member of the Scottown Farmer and Farmerettes, won grand champion in the fancy poultry category. He won with a silver duckling and a silver blue grey.

“I’ve been raising chickens for about 10 years,” the 14-year-old said. “I’ve been showing for about four year. But this is my first time winning.”

The final category of the night was showmanship in which the kids had to explain their knowledge of their animal and the handling of the chicken.

Tessa Shelton, from Kitts Hill and a member of the Starlight 4-H group, won junior reserve champion for the looks of her chicken and grand champion for junior showmanship.

She won with a bearded silky chicken, which is black and fuzzy looking rather than the standard chicken.

“I feel good about it,” she said. “I’ve been showing for four years. I won last year for the looks, and champion in showmanship and Showmen of Showmen.”

She said she was nervous about being in the Showmen of Showmen contest again.

“But it will be fun,” Shelton said.