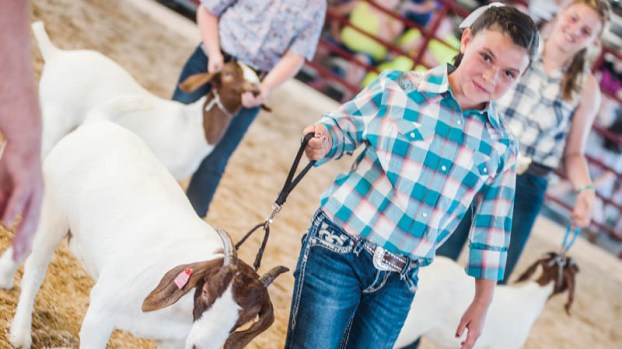 Isabella Kerns won reserve champion in junior showmanship and was grand champion in meat production in the goat show.

ROME TOWNSHIP — 4-Hers showed off their livestock at the dairy goat, pack goat, pygmy goat and breeding goat show at the Lawrence County Fair on Sunday.

The competition was judged by Julie Morrow, who has been raising goats for 25 years and judging them for 15.

She said she looks for different criteria in each category, but there are some overall things she considers.

“Basically, for any breed, we look to see which animal is most complete and which breed has the most character of their class,” she said.

She said she was impressed with what she saw at the show.

“It’s been nice,” she said. “The kids have been polite and you can tell they have worked hard on their projects.”

In the meat production category, entries were broken down into three classes before overall winners were chosen.

The grand champion was Isabella Kerns of Ironton, who is part of the Gingham and Denim 4-H Club.

She said it was her second year in the competition.

The reserve champion was Griffin Fuller, and third place went to Bailey Fuller.

In the dairy goat competition, Benjamin Skaggs was the grand champion and Connor Franklin was named reserve.

In the pygmy goat show, Gracie Daniels was grand champion and Griffin Fuller was the reserve, while in the pack goat completion, Angela Stapleton was grand champion, Haley Worley reserve and Joey Jackson took third place.

A member of Gingham and Denim, he said he has been raising animals for seven years and plans to continue.

Morrow complemented him for his presentation in the ring.

“He maintained eye contact and was paying attention,” she said. “He was smooth and did a great job setting the animal up.”

Reserve champion in the category was Dylan Beck and third place went to Haley Worley.

She said she has been raising animals for five years and, while both she and Kerns presented well, Morrow said Daniels “moved to the top fairly easily.”

“She’s knowledgeable about her animal and is always paying attention,” she said.

ROME TOWNHIP — The Lawrence County Fair is in full swing and several events are planned for today. In addition... read more