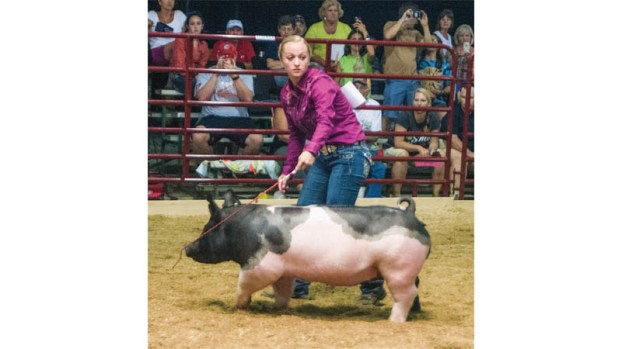 There were changes to the market hog show on Tuesday at the Lawrence County Fair. There was a later start time, less people allowed in the pen area and different formats.

Last year, the organizers had issues with too many people in the pen area and the show lasted late into the night.

So, this year, the only ones allowed in the pen area were the kids showing the hog and one parent or guardian. They were given special colored wristbands and anyone without one was asked to leave.

There was also a new format because of the high number of entries.

“We kind of changed the rules around. If we had over 100 hogs, we were going to go into divisions instead of classes,” explained Drew Schmidt, a member of the Livestock Committee.

He said before, they could have up to 16 classes of hogs if that was the way the weights broke. That meant at the end, they had 16 pigs to choose a grand champion and a reserve champion from.

“This just simplifies the process. Each division will have a top 10 placing in it, so it’s like a mini show,” Schmidt said. Then the grand champion and reserve champion were picked from the top two of each division. “Now, there won’t be as many animals in the ring at one time, just to try to cut down on the hectic process.”

“Initially, when we checked the weather, it supposed to be a lot hotter,” Schmidt said. When the temperatures didn’t climb into the 90s, there was a discussion about changing it back to 6 p.m. but they didn’t because the announcement about the 7 p.m. start time had already gone out.

“It’s hard to go back and forth when they are trying to get ready for the show,” he said.

The changes did work to make the show run faster, with the show ending at 11 p.m. which a person remarked was much earlier than last year.

The grand champion winner was Kara Saunders, who had a 276-pound hog in the heavy weight division.

“I was pretty surprised to win, it took a lot of hard work and dedication,” said Saunders, of Kitts Hill and a member of the Starlight 4-H Club. She had won reserve champion two years ago. “I’m very happy to win tonight.”

“I feel really, really glad,” said Lewis, of Willow Wood and a member of the Willow Wood Wranglers 4-H Club. “Because my bub taught me everything about raising pigs. I thought I wasn’t going to win, but whenever they said my name, they started cheering, I knew that I won.”

ROME TOWNSHIP — Wednesday was the second day for farmers to present their rabbits to the judges as two competitions... read more