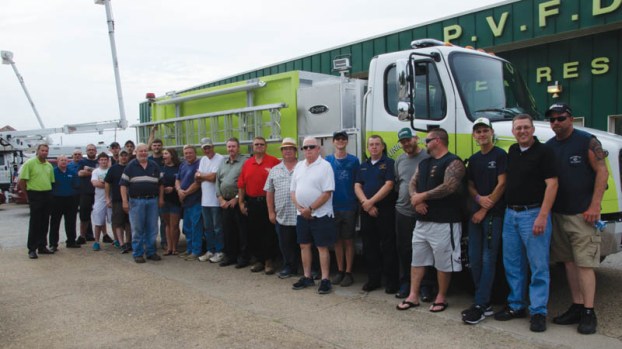 PROCTORVILLE — Fire crews and local officials gathered at Proctorville Community Volunteer Fire and Rescue on Tuesday for the unveiling of the newest fire truck for the area.

The new, bright green, 2017 E-1 model will serve both Proctorville’s crew and the Union Township Volunteer Fire Department. It will replace a 1994 model.

This brings the departments’ total vehicles to seven, five of which are trucks, assistant fire chief Gary Whitley Jr. said.

Proctorville Mayor Rick Dunfee and Terry Porter, chairman of Union Township’s trustees, were on hand with fire crews to look over the new vehicle.

Dunfee said Porter was “the main guy” in the local effort to secure the new truck.

The township issued a bond to purchase the truck, which was then bought by the office of County Treasurer Stephen Dale Burcham through the Lawrence County Neighborhood Investment Program.

“A political subdivision can issue a bond to purchase equipment,” Burcham said. “I, as treasurer, can invest in a bond.”

Burcham said there had to be a stated purpose for the bond he invests in, he then he issues a check to the township for the cost of the truck, buying the bond at a higher rate.

“They save on interest, and the money stays in the county,” he said. “It’s a win-win situation.”

Burcham said funds for the program come from the county’s inactive money, which is not needed for immediate use.

The program is used for public service projects, He said, noting this is the 34th bond he has purchased and the 23rd to be used for purposes like equipment.

ROME TOWNSHIP — If you have not had the chance to visit the Lawrence County Fair yet this year, you... read more