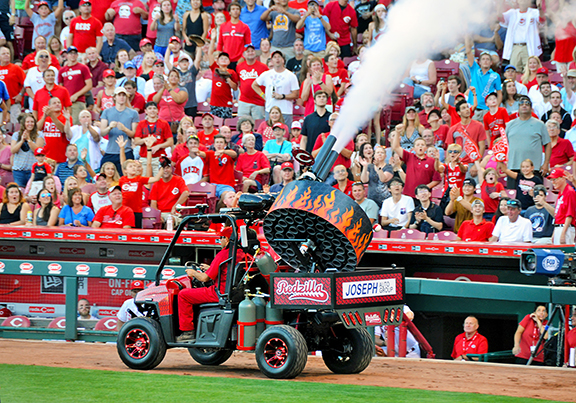 CINCINNATI — Friday night  at Great American Ball Park the Cincinnati Reds debuted “Redzilla,” the first-ever triple-barrel, cart-mounted souvenir launcher.
Mounted on the back of a high performance side-by-side ATV, Redzilla has 57 barrels and is capable of firing up to 171 soft baseballs or 114 t-shirts into the upper decks of the ballpark.
Fans can see Redzilla in action at all games this season during the middle of the 4th inning break and following each Reds win.
Fueled by 160 pounds of CO2 and generating nearly 1,000 PSI, Redzilla was created and fabricated by Fx in Motion from New Berlin, WI.
“Launching souvenirs into the stands is a fan favorite at Great American Ball Park,” said Phil Castellini, Reds Chief Operating Officer. “We designed Redzilla to be a spectacle that adds to the fun by launching t-shirts and balls unprecedented distances into the upper decks.”
Redzilla is proudly presented by the Joseph Auto Group.
“Joseph Auto Group is excited to partner with our hometown Reds to bring fans this new exciting element to the game experience,” said Ron Joseph, Jr., of Joseph Auto Group.