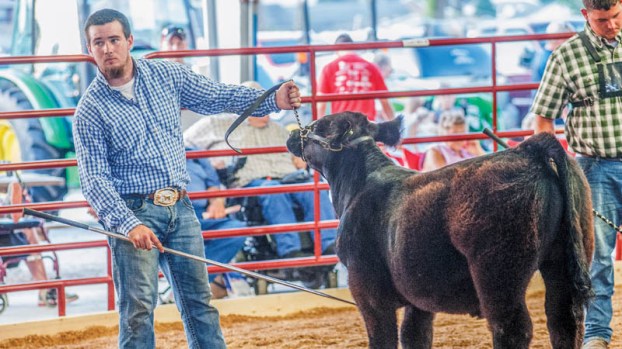 Show goes on despite rocky beginning

The 4-H Beef Show almost didn’t go on Thursday night. An apparent miscommunication and a missing judge lead to the show being delayed, first for half an hour, then for two hours, while a replacement judge was located. But once a new judge was found, the show went on without a hitch.

Devin Coon, an animal science student at the Ohio State University, and a member of the OSU judging team, drove in from Oak Hill to fill the role for the evening.

Black also took the showmanship award for the senior feeder class, with second place going to Karsyn Vall and third to Morgan Klaiber.

Brandon Fout took the showmanship award for the junior feeders, with Teddilyn Craft in second and Malaysha Kitts in third.

Black, who belongs to the Getaway Go Getters 4-H club, out of Chesapeake, said that he was excited for his wins.

Calaway, who also had strong showings in the breeding division, earning first place in class 1 and second in class 4 with her heifers, attributed her success to the work ethic her family instilled in her.

“Our family motto is, ‘all the winning is done at home,’” Calaway said.

She and her father spend long hours in the barn, working with and caring for their animals, she explained.

In class 3, it was Nichola White in second place and Sara Leith in first.

Malaysha Kitts, from the Greasy Ridge Gang 4-H club was the sole entry in class 5, but she demonstrated the importance of entering when she came back to win the Grand Champion in the breeding division, with Luke Leith, from the Starlite 4-H club in Pedro, whose siblings also took first in their classes, taking reserve champion.

And they all fall down