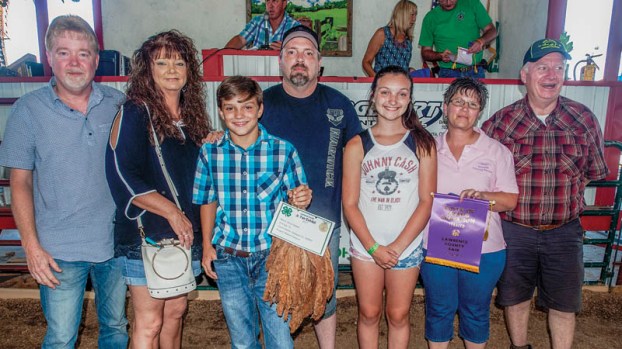 Devin Barker was the only tobacco entry who sold in the auction. He is pictured with bidders Riverside Recovery Services, Jim’s Termite and Pest Control, R&D Giovanni’s and Ward’s Service Center. Winning bid was $2,000.

Tobacco crops shown off at fair

ROME TOWNSHIP — While the Lawrence County Fair is best known for its animal shows and auctions, some 4-H members still take time to produce and display the region’s first cash crop.

Her grandmother, Jeri Stallo, said tobacco was a major money-maker for the region in its heyday. Her grandson, Wyatt Stallo, was last year’s grand champion and her family always takes part in the event.

“We try to keep the tradition alive,” she said, noting that it is the only crop at the fair.

“Some fairs have soy and other things,” she said.

Preparation of the crop is a multi-step process, and involves a lot of work.

Jeri Stallo said the plants are started in a floating planter and then transplanted later to the ground.

After it is harvested, the tobacco is hung to dry and then tied in clusters, like the ones that were on display at the 4-H shelter throughout the week.

She said judges look not just at the size of the leaves, but also the thickness and quality.

Entrants in the competition are able to sell their crop in the small animals auction at the end of the fair.