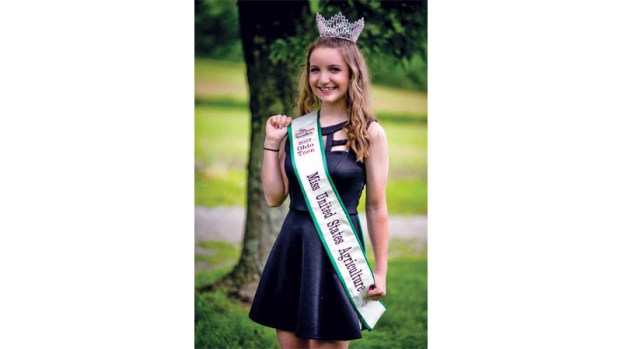 Maddy Calaway, 16, who will be a Symmes Valley High junior this fall, won the title of Miss Teen Ohio U.S. Agriculture in May and went on to compete for the national title at the pageant in Birmingham, Alabama on June 24.

Speaking for the state

PROCTORVILLE — A Lawrence County teen has taken her involvement with agriculture and pursued it at the national level.

Maddy Calaway, 16, who will be a Symmes Valley High junior this fall, won the title of Miss Teen Ohio U.S. Agriculture in May and went on to compete for the national title at the pageant in Birmingham, Alabama on June 24.

Maddy decided to enter the statewide competition after learning about it online.

“She saw it on a website and decided to try for it,” Carrie Cheek, her mother, said. “It’s a fairly new competition. It was started around 2009.”

Maddy, the daughter of Cheek and Rob Calaway, has been raising cattle for about two years.

She credited her win to her family for instilling a work ethic in her.

“Our family motto is ‘All the winning is done at home,’” she told The Tribune at the event, where she also won the fair princess crown.

After winning in the market steer competition, Maddy, a member of the Getaway Go-Getters 4-H club, became visibly moved and cried happily.

“She’d had that one since it was a baby,” Cheek said of the steer.

Cheek said the statewide title was determined based on the entries participants sent in, while,  for the national competition, which took place at the Wynfrey Hotel, there were 13 in the teen competition and entrants must be involved with agriculture in some form.

While competing, she said the girls could choose between more individual interviews, showcase their state through dress, write an essay or enter the photogenic category.

Maddy chose the essay option, she said. She also had to introduce herself and give information on her home state.

“Ohio’s agriculture industry is the biggest in the state,” Maddy told the judges, detailing the main sectors of sheep, dairy, soybeans and field corn. She said the industry generates $105 billion annually for the state, which she noted also has one of the biggest Amish populations.

She then gave information on her involvement in agriculture, such as serving as secretary for the junior fair board and president of the Lawrence Cattle Association, as well as the student council at her school.

“I’m really looking forward to this and want to thank my friends and family for helping me come this far,” she said.

For her statewide win, Calaway received a crown and sash to wear at the national event, and the option of $3,000 in scholarship money.

Her mother said she drove her to the Birgmingham competition and is proud of the accomplishments of her daughter, who she said wants to be a veterinarian.

“She does a good job at what she does,” she said.

Will include EMS station, senior and community centers ROME TOWNSHIP — The Lawrence County Fairgrounds will be receiving some new... read more