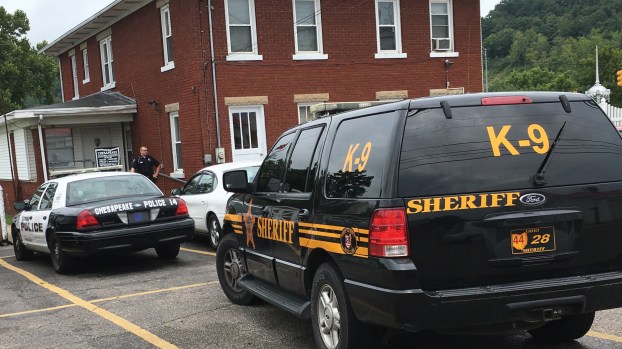 The Tribune/Heath Harrison Deputies from the Lawrence County Sheriff’s Department are stationed outside Chesapeake Village Hall, after being requested at an emergency meeting of village council on Friday. 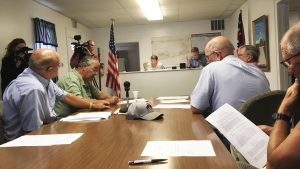 CHESAPEAKE — Village hall was filled to capacity at an emergency meeting of Chesapeake’s council on Friday, focusing on the resignation of the village’s interim police chief. However, the meeting focused solely on business and did not take public comment.

Randy Lewis, who has served as chief since September, submitted his resignation on Monday, citing disagreements on a number of issues. The mayor accepted his resignation, which as voted on by council members present, 4-0.

But since Lewis’ resignation came as a surprise and was not on the agenda for Monday’s meeting, Templeton, acting on advice of village solicitor Casey Baker, called Friday’s meeting to have a new vote on the matter.

More than 20 attended the meeting, more than the small meeting room could accommodate and the crowd overflowed into the adjoining room.

The meeting began with the mayor and council going into executive session for discussion.

When they emerged, Baker gave an explanation as to the purpose of the meeting.

“This is a procedural matter only today,” he said, explaining that, under Ohio law, the resignation needed to be on an announced meeting agenda.

Council member Randy Penix put forth the motion to accept Lewis’ resignation, which was voted for, 5-0. Member and Mayor Pro Tempore Kenny Wolfe was absent.

At this point, Baker left and Templeton moved on to the next item on the agenda, the tax levy to fund the police department.

He said the levy, which had been submitted to the board of elections, needed to be reworded to specify what the funds raised would be used for.

The council had the option to pass with the new wording and put it on the ballot, reject it, or pass it, submit it to the courthouse and make changes.

Penix called for putting it on the ballot as worded, and the council voted 4-1 to do so.

Member Paul Hart voted “pass” on the matter, stating that he was doing so since Wolfe was not present.

“The mayor pro tempore is not here and he voted against it last time,” he said.

Templeton reminded Hart that “pass” was equivalent to a vote of “no.”

It was at this point that Templeton called for and council voted to adjourn the meeting.

After a few seconds of silence, Lewis, sitting at the rear of the still seated crowd, asked Templeton, “Are you not going to give these citizens a chance to speak in public session?”

The crowd remained seated for a few minutes, with a few speaking with members of the media present, when one person in the group said they had heard that Templeton had called sheriff’s deputies.

A minute later, two deputies arrived and the crowd filed outside, without incident or being requested to.

Most stood outside on the lot, where Lewis spoke with them for some time, while two deputies were stationed by the village hall’s entrance.

Mark Pike, a Chesapeake resident, said he had come to voice his criticism of Templeton on the matter.

“The mayor needs to do his job and let the police department do its job,” he said of the issue of the mayor producing a badge and acting as an officer, one of the points of contention Lewis, as well as his predecessor, Lenny Abrams, had raised when resigning. “The mayor wants to pretend he’s a police officer.”

Abrams had served in the position for several months following the removal of his predecessor, Dennis Gibson, by council in April 2016 during an administrative hearing after charges were brought against him by Templeton.

“We’ve been through three chiefs in 16 months,” Pike said. “You do the math. They say it’s always the chief’s fault and not the mayor’s fault. I think the village should consider getting a new mayor.”

Pike commended Lewis for his work in the position.

“He’s a done a great job,” he said. “He’s been great. Since he’s been chief, the police have been more professional than they’ve ever been.”

After the issue of the mayor’s law enforcement powers was raised by Abrams last year, Templeton produced an opinion letter from Baker, finding that he was in his authority to detain people and make arrests.

One Chesapeake resident, Gordon King, who was passing by on his bike, stopped to talk with the crowd. He also shared Pike’s view.

“If the mayor wants to be a police officer, he should have gone to police academy,” he said, and stated Baker’s letter was “only an opinion” on the matter and not definitive.

Most council members left immediately after the meeting, though Hart took time to speak to Lewis and members of the crowd.

He said the meeting was called to ensure proper procedure and to “straighten up the mess made” from Monday’s vote.

Hart speculated the controversy over Lewis’ resignation could hamper efforts to pass the police levy, which he said he voted against because he felt it needed to be a unanimous vote from the entire council.

The deputies present said they were not authorized to speak on why they were called and referred all question to Lawrence County Sheriff Jeff Lawless. They remained stationed at the door as the gathering thinned, with no incidents taking place.

Lawless told the Tribune by phone that they had been asked by village officials, prior to the meeting, to come by.

“It was in case there were any issues,” he said, noting the crowd was expected to be larger than usual due to the controversy. “Our officers did not see any incidents.”

Lawless said he was unsure if a separate call was made during the meeting.

Inside, after the room was cleared, Templeton conducted an interview with media present.

He reiterated Baker’s explanation of the need for a new vote and stated that Lewis had been “very disruptive” in how he went about his resignation at Monday’s meeting.

Templeton said he had asked the deputies to come.

“I heard comments being made and thought it was going to escalate,” he said.

He said the reason there were no comments taken from the public was because it was not on the agenda.

“Whatever we specify is on the agenda is what we stick to,” he said, adding that the public routinely gets a chance to speak at the council’s regular monthly meetings.

“There was nothing to discuss,” he said. “ He didn’t want to leave and he didn’t have to. I hate that it’s come to this. He did do a good job.”

Templeton said he has known Lewis for more than 30 years, having been a close friend of his cousin since childhood.
“Is that friendship over?” he said of the former chief. “It sure is.”

He said Lewis was removed from duty, “effective immediately” and that Randy Thompson, who has served as the village’s assistant chief is now acting as chief.

“I’ll probably swear him in this weekend,” he said, adding that, given Thompson’s extensive law enforcement career, it was not required, but he would also likely give the oath again for the public at the next meeting of council.

Templeton said Lewis had become frustrated with the funding of the department.

“We don’t have the money that he wanted to spend,” he said. I’m pro-police and I wish I could buy them everything – new cars and service weapons.”

Templeton said, since he became mayor, the department has been able to purchase two newer cruisers.

“I strive to give the police department every dime I can, but we still have budget constraints.”

He urged the passage of the levy, noting that, currently the village has the lowest paid force in the county and that it is impacting officer hiring and retention.

He said he hated to call for it, but budgetary needs made it necessary.

Lewis spoke with The Tribune following the meeting and took issue with the lack of public comment and the calling of deputies.

“Well, it was another pathetic display from Mayor Templeton, to order taxpaying citizens off village property,” he said, stating he saw the mayor go into his office to make the call. “A lot of them wanted to talk, but the leader said, ‘No, get off the property.’”

He said he was not surprised public comments were not on the agenda.

“I expected it,” Lewis said. “He hasn’t done a thing right in nine months. Why start now?”

Lewis said, given the issues he had with the mayor, which were outlined in his resignation letter, he was “elated I’m no longer associated with Mayor Templeton in any way.”

The next regular meeting for village council is set for Aug. 7 at 7 p.m.