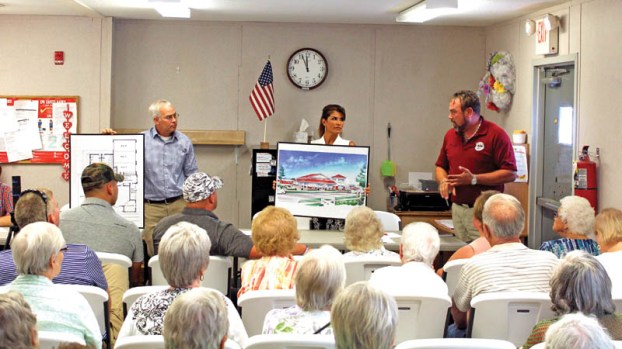 Lawrence County Commissioner Freddie Hayes Jr. (right) talks about the upcoming project at the county fairgrounds, which will include a new eastern end EMS station, a senior center and community center. Commissioner DeAnna Holliday is holding a drawing of the outside of the building, while Commission President Bill Pratt holds the floorplan for the new EMS station.

With the Gold Plus status of the award, Lawrence County EMS solidifies its stance in the top one percent of EMS agencies nationwide.
At this week’s county commission meeting, which was conducted at the Chesapeake-Sybene Senior Center in front of a full crowd Wednesday morning, county EMS director Buddy

Fry spoke about the award before Commission President Bill Pratt read a letter from the Ohio Senate honoring the agency for its achievement.

“On behalf of the members of the Senate of the 132nd General Assembly of Ohio, we are pleased to pay tribute to Lawrence County Emergency Meical Services on being presented with a 2017 Mission: Lifeline Gold Plus Award by the American Heart Association,” the letter, which was signed by Ohio Senate President Larry Obhof, Senator Bob Peterson and Senator Joe Uecker, stated. “…Lawrence County Emergency Medical Services has continued to gain the trust and confidence of the local area through the exceptional efforts of its loyal and talented firefighters, emergency medical technicians and paramedics who have worked diligently to protect the lives and property of all citizens. The exemplary manner in which they have carried out their many obligations is deserving the highest praise, and residents can look forward to the department’s ongoing assistance in the years to come.”

Following the recognition of the award, Pratt further stated the importance of the upcoming 2-mill EMS levy that will continue to provide Lawrence County EMS with funding, which will appear countywide on the November ballot.

“Without a set income like they have now, the county EMS won’t be able to operate at the level they are now, or even at all,” Pratt said. “We can’t be without EMS in Lawrence County, and the levy gives us a chance to be proactive on the issue.”

Commissioner Freddie Hayes Jr. agreed, and said it was a matter of yes or no.

“This is a yes or no vote,” he said. “It’s either yes, we’ll continue to have EMS in the county, or no, we won’t have EMS. It’s that kind of issue right now.”

Hayes added that although he has always been against taxes, he is not against safety, stating that continued countywide EMS is greatly needed.

Fry also added that Lawrence County EMS is making a record number of runs so far this year, with 6,807 total runs made to date as of Wednesday. In the same time period last year, EMS made a total of 6,290 runs.

Assistant Director of the Lawrence County Department of Job and Family Services Rich Blankenship also spoke at the meeting about the Ohio START (Sobriety, Treatment and Reducing Trauma) Grant that the department received from Ohio Attorney General Mike DeWine’s office earlier this year.

The grant is for the department’s children’s services division, and will assist children who are affected by drug-related issues in their families for half of this year and the next two years.

He said he is working with different agencies to try and reduce the county’s match money for the grant, and would keep commission updated on the progress.

“Right now, we have 71 children in the custody of the department of job and family services,” he said. “And 45 of those are drug-related.”

He added that one of the biggest issues being faced right now, not just here in Lawrence County, but everywhere, is trying to find foster homes for children.

During the commissioners’ reports, Commissioner DeAnna Holliday spoke about the successful lip sync battle fundraiser the county domestic violence task conducted at Ironton High School this past Saturday, which she said was one of the best experiences she’s ever been a part of.

Holliday performed in the battle, along with common pleas judge Andy Ballard, clerk of courts Mike Patterson and treasurer Stephen Burcham, in which their group raised $1,000 for the cause.

Commission then talked about the upcoming project at the county fairgrounds, which will include a new three-bay EMS station for the eastern end of the county, as well as the new senior center and community center.

Commission has worked with the county port authority and the LEDC, and the fair board recently voted to accept a $300,000 offer for the piece of land at the fairgrounds the project will be built on. The fair board is going to use that money for its barn debt, leaving a balance of $210,000 on the barn, which will be covered by the remaining pledges.

Hayes said the project needs an additional $1 million for the senior and community center, but assured the crowd at the meeting that it will get done if commission and the community stays on top of the project.

In other action, commission:

• Approved and signed the Consulting Services Agreement with Euthenics as requested by Lawrence County Engineer Patrick Leighty and approved by the county prosecutor’s office. Leighty said this has to do with a landslide on County Road 42.

• Approved and signed the FY2018/19 Community Based Corrections Program Subsidy Grant Agreement Addendum for $248,099, approved by the county prosecutor’s office.

• Received and filed the Certificate of County Auditor that the total Appropriations from each fund do not exceed the Official Estimate of Resources.

• Terminated the part-time employment of Paramedic Raymond Charland and EMT Brett Spitler for failure to be available for work during the period of May-June 2017, as required by policy.

• Received and referred the correspondence from the Civil Rights Commission to the Lawrence County Prosecutor’s Office.

• Approved the bidding specs for STANTEC regarding the FY 2017 Tree Clearing Project at the county airport.

Court cracks down on drug abuse