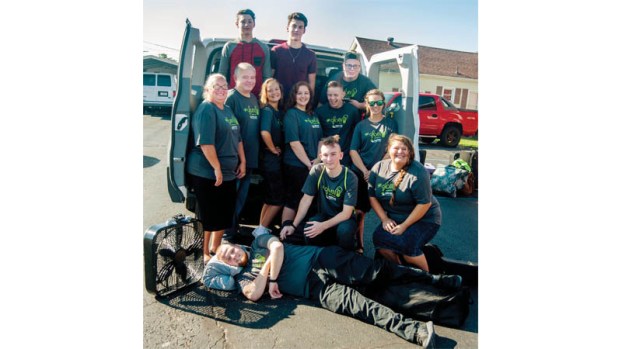 Youth from the Greater Faith Apostolic Church, located on the corner of Sixth and Spruce streets, in Ironton, gather before heading out to Indianapolis for the North American Youth Congress.

A group of 11 teens from a local left Ironton Wednesday morning, on route to a national youth event in Indianapolis.

The delegation, from the youth group as Greater Faith Apostolic Church, will take part in the North American Youth Congress, which runs through Friday at Lucas Oil Stadium, the home of the Indianapolis Colts.

The event is the largest gathering of apostolic students in North America and takes place very two years, rotating to different host cities.

Two of those attending will be cousins Brooke Brown, 16, and Britany Brown, 15, both students at Ironton High School.

Britany said their church is going, as they are affiliated with United Pentecostal Church. She said the trip is organized by her father Gene Brown, the youth pastor at the church, and her stepmother, Michelle Brown.

Brooke said the event will have a large turnout.

She said church services will take place day and night.

“There will be events where we bow and worship,” she said.

Both of the girls said they have attended the event before, when it took place in Louisville in 2013.

“It was great and life-changing,” Britany said.

Brooke added that they were both looking forward to attending this year, now that they are a little older.

Brooke said one of the highlights of this year’s event will an action aimed at those in need.

“We’ll be joining together to feed the hungry,” she said of the event, which will take place in the blocks around the stadium and is expected to draw 200,000. “They’re going to try to set the Guinness world record for most people in that time.”

The youth group is comprised of members of the teen class at the church, which ranges from ages 12-18. The group also meets for activities and events outside of church services.

Speaking for the state