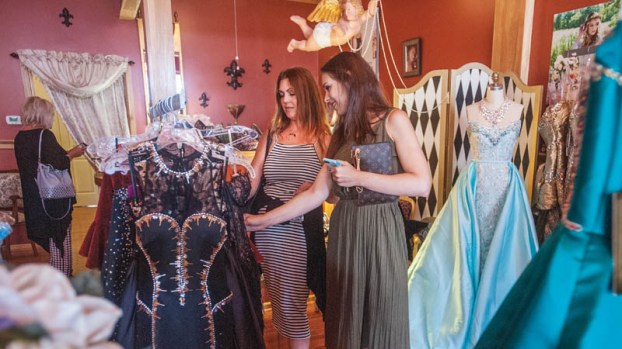 Victoria Powell, left, and her daughter Tori browses through a selection of elegant dresses during the Thursday afternoon grand opening of Decadence, located in downtown Ironton on South Third Street.

Downtown Ironton welcomed a new business Thursday afternoon, as Decadence “The Unique Boutique” hosted its grand re-opening at its new location on S. Third Street with a ribbon cutting.

“We outgrew that location very fast, and moved around the corner,” Scott said.

Usually, it takes three to five years to be nominated, but the business was nominated after being open for six months.

From opening up at the Arcade in Ashland and then moving to another Ashland location, Decadence was open until 2013, when Scott said he had to close the business due to a family illness and move away.

“While we were closed, I still kept social media and the website up, and worked with people privately,” he said. “But we’re happy to be back open here in Ironton.”

Scott said he has always been in retail, working for some of the bigger retail companies in the country.

He said that really helped his business take off, and that he started getting into formal wear at a young age.

“When I was 16, I formed my own talent show, then I decided to start a beauty pageant,” he said. “At age 20, I started judging for the Miss America organization.”

Another reason he decided to open a formal wear shop was because of the growing number of formals that go on in the Tri-State, starting at the beginning of junior high in some cases.

“When I moved here, it’s the only place that has all of these formal dances,” he said. “And I said ‘why not open up a formal wear shop and never charge full price?’ No one should have to pay $800 for a dress.”

Along with carrying formal wear at less than retail prices, Decadence is also the exclusive Tri-State carrier of dresses by Johnathan Kayne, who competed on two seasons of Project Runway and counts Jennifer Lopez and Miranda Lambert among his celebrity clients.

While in Ashland, Scott said that Decadence was also very involved with local charities and groups, including the Ashland Animal Rescue Fund (AARF) and the Paramount Arts Center. He said that now that they’re in Ironton, they are looking forward to working with local groups and charities here as well.

Scott also added that he chose Ironton for Decadence’s new location while looking for homes, and because he’s close with the old owner of Glitter’s, which used to be in the location of Dick’s Music Shop next door.

At the ribbon cutting for the grand re-opening on Thursday, Shirley Dyer, director of the Lawrence County Chamber of Commerce, Ironton Mayor Katrina Keith, Ohio University Southern Dean Nicole Pennington and the City National Bank Ironton branch Manager Massie Schemmel assisted with the ribbon cutting, before the doors were open for business.

“We’re very happy to be back in business,” Scott said. “It’s been three years, but a long three years.”

Decadence “The Unique Boutique” is located at 113 S. Third Street in downtown Ironton.

Currently, it is open from noon – 5 p.m., Wednesday through Saturday. However, starting in August it will be open full time.

A group of 11 teens from a local left Ironton Wednesday morning, on route to a national youth event in... read more