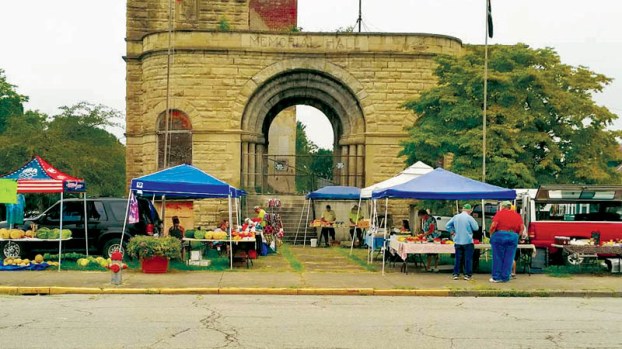 Because of Rally on the River having events in Market Square, the Ironton Farmers Market is moving temporarily to the old Memorial Hall property on the corner of Railroad and Fourth streets. The market will still be open from 7 a.m.-3 p.m. on Friday and Saturday.

Farmers Market to relocate this week

For one week only, the Ironton Farmers Market will be relocating.

Since the Rally on the River is set up for the weekend at Market Square on Second Street in downtown Ironton, the farmers market will relocate a few blocks over at the old Memorial Hall building at the corner of Railroad and Fourth Street.

Sam Heighton, executive director of Ironton aLive, said that they decided to keep the market open since it is the height of the season.

“During the rally, we have always moved it somewhere else,” he said. “The last couple of years, we have set up in front of Memorial Hall and it’s a pretty good place. It’s a nice, wide street with plenty of parking.”

He added a lot of people use that road as a route around the rally.

“The vendors do pretty good there and people seem to like it,” Heighton said. “This way, they don’t have to miss a week.”

And Heighton pointed out that one of the streets next to Memorial Hall is called Market Street.

“Back in the early days before the hall was there, that is the block where farmers used bring their produce to sell, so it seems to be a very appropriate place to have this.”

The farmers market will still be open on its usual schedule of 7 a.m.-3 p.m. on Friday and Saturday morning with the usual vendors selling homegrown and locally grown produce. Amongst the items for sale are honey, baked goods, jelly, fruit butters, eggs, and homemade crafts.

The market is a project of Ironton aLive and sponsored by Our Lady of Bellefonte Hospital.

Heighton said that he hopes after people shop the farmers market, they stop by the rally and support those people too.

Rally on The River will be Thursday-Saturday in downtown Ironton at the Ironton Farmers Market Square location on Second Street. It will feature bands, camping, bike shows, stunt shows, vendors and a poker run.