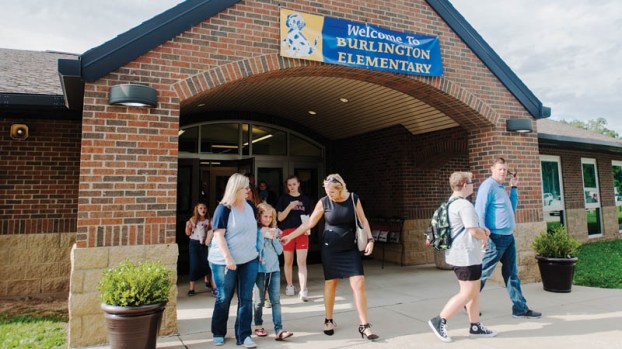 Students get ready for a new school year at Burlington Elementary School.

BURLINGTON — There are some changes at the top, but Burlington Elementary students will be returning to a familiar environment today.

To help prepare them, the school hosted a back-to-school open house on Monday for students and their parents, allowing children to see which class they are assigned to, meet their teachers and socialize in the cafeteria, where refreshments were provided.

This year sees a newly-minted principal, Michael Clay, take the helm of the school of approximately 400 students.

But, Clay, who has served as assistant principal at the school for five years and is known for his enthusiasm for education, is no stranger to returning students.

Previous principal Sarah Nuckols will still be on hand at the school, but is returning to teaching and will serve as third grade social studies instructor.

Clay said there are no other changes in the line-up for teachers at the school, with all instructors returning for a new year.

“We like to keep them  all around,” he said.

Moving into Clay’s old job and named in June as the new assistant principal is Cassie Lunsford, who has been a teacher at South Point Middle School.

Lunsford said she is looking forward to the school year, her first in administration.

While her previous job was at the middle school level, she said she is ready work with younger children.

“I did methods classes at an elementary school,” she said. “And, of course, I have two kids — a three and a four-year-old.”

Clay said the school has many activities planned for the school year, including the construction of a reading pavilion, similar to the one erected at South Point Elementary in the spring.

In addition to returning students, Burlington will see a new group of kindergarteners, in three classrooms, enter the school for the first time on Thursday, one day after the upper grades begin.

Stacie Rutherford, who is entering her fifth year as a kindergarten teacher at the school, said Monday was the first time for her to meet many of her new students.

“For the most part,” she said. “But many were here in May for registration.”

The first day of school will see a parting between many parents and children.

“It’s usually harder for the parents than the kids,” Rutherford said. “But we tell everyone to stay strong and smile when they walk through that door.”

Brandi Pratt, who is starting her fourth year teaching the fourth grade at the school, said Monday’s event is helpful to students winding down their summer.

“They get to see their classrooms and meet their teachers,” she said. “It calms their nerves.”

Also in the district, nearby South Point Elementary hosted an open house as well on Monday and, for parents seeing their kindergarten students leave for the first time, the school is planning a “Boo-hoo breakfast” Thursday morning.