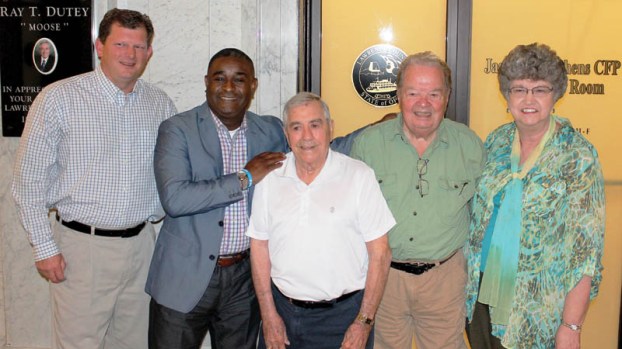 “I wanted to visit Lawrence County for the education,” Mingo said. “I wanted to learn and understand what people appreciate and what people’s challenges are and how I can be a part of resolving them. It’s time very well spent.”

Mingo, who has been involved in politics for the past decade, has been the Franklin County auditor for about eight and a half years, and said that Franklin County is a challenging place to be a Republican, but that it has made him very disciplined, smarter and has required him to work very hard.

“It’s required me to stand for the conservative values that I believe in, even if it’s not the most popular thing to do in the area,” he said.

Topics Mingo touched on during his visit included focusing more on families rather than government, the importance of small businesses and employment, and retirement.

“Right now, people are focused on family, and major issues are going to get solved through families, not government,” Mingo said. “We need to make sure our families are strong. Family is a big part of the equation to Southern Ohio’s challenges.”

He added that one issue strong families would help combat is the opioid epidemic going on in our state, region and throughout the country.

“At the end of the day, it’s what’s happening in our homes as far as prevention and going through the treatment side of it,” he said. “It’s all about love and fellowship. We have to get to know one another as individuals.”

Love and fellowship are common themes for Mingo, who said that he is a Republican because conservative values work and transcend race and color.

“We as Americans and Ohioans have to choose what kind of nation we want to be,” he said. “We need to be like what’s going on in Texas right now, where people are helping everybody, no matter if they’re black, white, Asian, whatever. Or the other option is what we saw in Charlottesville, Virginia a few weeks ago.”

As far as helping Ohio’s economy, Mingo said focus needs to be on small businesses, and giving them available capital to expand, grow and modernize, which allows job growth and a plan for the future.

Stephens said he was glad Mingo had the opportunity to visit Lawrence County ahead of the election this fall.

“Ohio is a huge state, and for a candidate to want to represent Ohio, I think it’s important to step foot in our county,” Stephens said. “He’s the first statewide candidate on a down ballot race to come down and spend some time in Lawrence County for this election cycle.”

Other candidates, alcohol measure fail to make ballot After the Lawrence County Board of Elections verified the petitions and signatures... read more