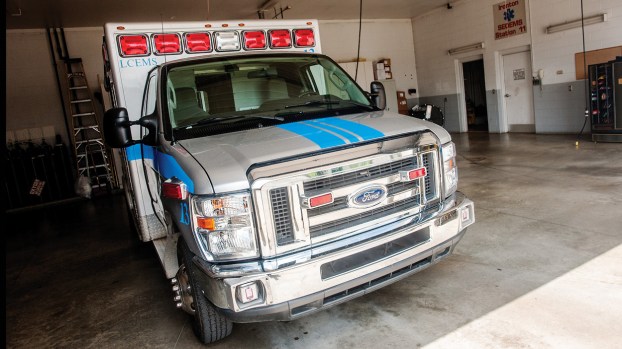 The tribune/jessica st. james A 2-mill levy is on the November ballot to create a proected revenue source for EMS.

EMS funding to be on ballot

Voters in Lawrence County will be asked to decide on a number of local levies in this fall’s general election, with the county Emergency Medical Services getting the most attention.

The 2-mill levy for EMS is intended to bring a protected revenue source to replace the current system, which splits funding between EMS, 911 and the county sheriff’s office.

The push for the levy comes as Ohio is set to lose its Medicaid sales tax, which makes up 60 percent of the county’s budget.

Fry said the county stands to lose $1.4 million, in the form of 1.5 percent of operating funds as a result of the tax ending.

He said one percent goes into a general fund, while 0.5 percent funds EMS.

Fry said the sales tax is set to end on Oct. 1, and due to a three-month lag in collection of funds, the impacts of the change would take effect in January.

He said if the levy does not pass, “It would greatly reduce services provided, if not eliminate EMS as we know it.”

The Lawrence County Commission has been pushing for the levy, stressing the need for safety funding. All three commissioners have spoken in favor of passing the levy.

The commission has said the levy would bring in an estimated $2,324,787 if passed.

Fry said, in addition to funding current operations, passage of the levy is needed when accounting for the future.

“The eastern end of the county is growing by leaps and bounds,” he said. “We need to look at what we’re doing in 2017, but also look at what the future holds.”

He said the funds could help pay for expansion of EMS services in the eastern end of the county, as well as northern, rural areas.

“There’s a 26-mile stretch on State Route 93, where there is no station,” he said. “If the levy passed, we could look at adding a station.”

A program that Lawrence County Common Pleas Judge Andy Ballard has been promoting for several weeks had its first offender... read more