Vikings grind out win over Knights 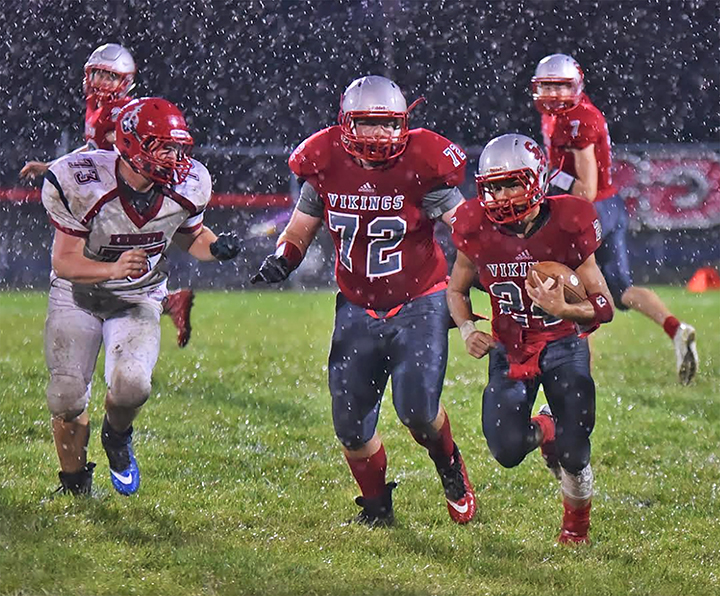 Symmes Valley Vikings’ running back Layken Gothard (24) cuts off the block of Nick Landers (72) as he gains yardage against Fairfield Christian on Friday. The Vikings won 43-0 to go 2-0 on the season. (Robert S. Stevens & The Gold Studio in Ironton)

WILLOW WOOD — The grinders at a fast food restaurant are good, but the Symmes Valley Vikings prefer the taste of their own “grinders.”

The Vikings used a strong running game to grind out a 43-0 rout of the Fairfield Christian Knights on Friday.

“You run for almost 400 yards, you’re getting things done up front,” said Webb. “And our backs did a better job blocking for each other.

“I can’t say enough about our kids. They looked sluggish at times last week but they really played well tonight, especially our offensive line.

Layken Gothard led the grinders with 120 yards on just seven carries and scored three touchdowns. Derik Brace had 76 yards on five carries and a score, and Austin Waugh 35 yards on three tries with a touchdown.

Keifer Wilson ran twice for nine yards and a touchdown.

The Vikings scored all their points in the first half.

Brace and Waugh each scored a first quarter touchdown and Gothard scored twice. Gothard ran for two conversions and Keifer Wilson threw to Austin Mannon for the other conversion.

Gothard added his third score in the second quarter and Wilson kicked the extra point.

Defensively the Vikings held the Knights to just 65 yards of total offense. They were 13-of-39 passing for 42 yards and three interceptions and ran nine times for 23 yards.

“I can’t say enough about our defense. (Fairfield Christian) had over 200 yards last week against Caldwell. Our front four had a nice pass rush and our back seven did a nice job in coverage,” said Webb.

“For as much as they spread us out, we did a great job of tackling in space. We had very few missed tackles.”

Gothard, Waugh and Wilson all had interceptions while Nick Landers had a fumble recovery.

Redmen run past Northwest as Lutz gets first career win