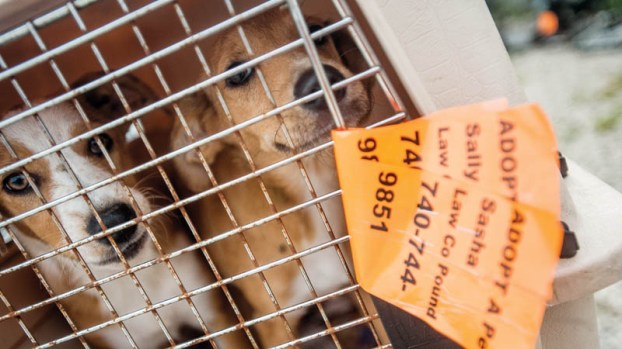 Two dogs share a portable kennel on Thursday before being loaded into a van bound for the Columbus area by Stop the Suffering, a nonprofit, volunteer organization that saves animals from euthanization.

Dozens of dogs and puppies are on their way to what is hopefully a good home for them.

The Lawrence County Dog Pound, working with local rescue groups, hosted a pick-up of the animals on Thursday at the shelter.

Poundkeeper Melissa Nicely said the shelter was working with local groups, such as One-by-One Animal Advocates and Sylvia’s Sanctuary to arrange for the 39 dogs to be sent for adoption.

She said the shelter meets weekly with a group from Scioto County to do pick ups, but, due to the large number on Thursday, the site was at the Lawrence County shelter.

Nicely said that the animals are bound for adoption groups in places such as Canada, Pennsylvania, northern Michigan and Cincinnati.

Nicely said the Lawrence County shelter is a low-kill shelter, meaning that less than 10 percent of animals are euthanized, and only in case where they can not be adopted.

She said they are always in need of supplies and are seeking donations from the public, such as old towels and blankets, as well as collars and leashes.

The cost of care