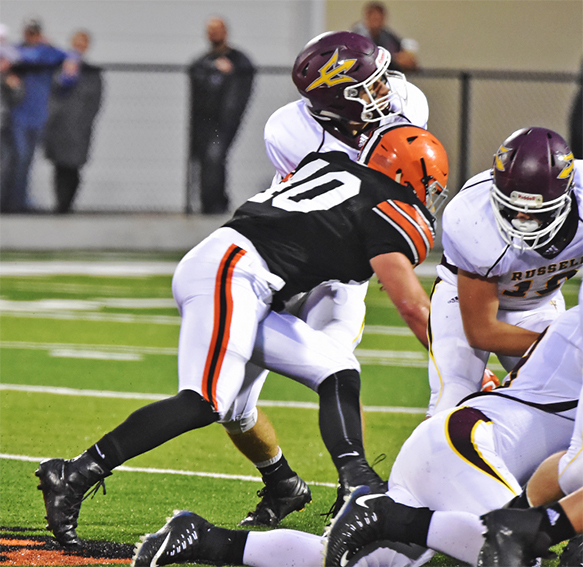 During the past two seasons, the Ironton Fighting Tigers have won the Ohio Valley Conference football title while the Fairland Dragons weren’t a threat.
That may have changed.
Ironton is still a contender for the league title this season but so are the Dragons as they head to Tanks Memorial Stadium on Friday.
“They’re better and they have some good skilled players. They have a lot of weapons offensively and they have been playing better defensively,” said Ironton coach Mark Vass.
Fairland lost a tough 20-18 decision in the first game at Portsmouth West. Last week West won 32-14 over a Portsmouth team that was one of the favorites to win the OVC.
The Dragons lost 38-6 last week at Wheelersburg but the game was just 17-6 at the half. Ironton lost to Wheelersburg 48-3 in the season opener.
Leading the Dragons’ offense is senior running back Keedrick Cunningham (6-1, 195) who has the speed to break big plays and is also a receiving threat.
Junior quarterback Joel Lambiotte (6-2, 170) is a three-year starter and he has some solid receiving weapons besides Cunningham.
Junior Ty Wilcoxon (6-2, 200) has been the main target and he has made numerous outstanding catches on key plays to keep drives alive.
Sophomore Reily Sowards (6-2, 160) is another excellent receiver while senior Robbie McFarland (6-0, 155) had a 38-yard touchdown catch last week.

“The quarterback is a good athlete. He throws the ball well and he has some really good receivers. Wilcoxon has been clutch for them,” said Vass.
Senior Chase Fisher (6-0, 215) is the fullback and is joined in the backfield by Cunningham and Wilcoxon.
Up front the Dragons had junior Jacob Rankin (5-10, 275) is the center, seniors Jacob Sheppard (6-1,185) and Mason Cox (5-10, 220) are the guards with junior Seth McClain (6-1, 190) and senior Zach Crawford (6-0, 260) the tackles.
Defensively the Dragons like a 4-4 look led by Fisher at inside linebacker. Wilcoxon is his running mate inside while McFarland and sophomore Michael Stitt (5-7, 145) are on the outside.
Up front the Dragons have Crawford and Rankin at the tackles with sophomore Kobe Newman (6-5, 220) and either senior Hunter Morrison (6-2, 235) or sophomore Blaine Cremeans (6-0, 155) the ends.
Cunningham and junior Greg Keeney (5-10, 165) are the corners and Lambiotte the free safety.
“They have a couple of good linebackers inside, some size up front and their secondary has speed and they will come up and make a hit. It’s a good defense,” said Vass.
Kickoff is 7 p.m.