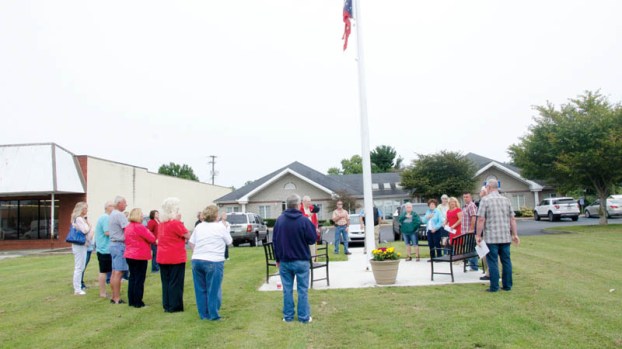 People gather at the flagpole outside South Point Village Hall as part of the Cry Out America memorial prayer service dedicated to the Sept. 11, 2001 terrorist attacks.

Cry Out America initiative calls for unity and Christian revival

SOUTH POINT — A group of people gathered at the flagpole in the plaza in front of South Point’s village hall on Tuesday to pray and memorialize the Sept. 11, 2001 terrorist attacks.

The event was part of the Cry Out America prayer initiative, which council member Mary Cogan said “reminds us of these attacks on our nation and of our desperate need for God each day.”

“As America remembers this day, we need to see it become a day where millions of Americans join for a few moments in various locations to cry out to God for our nation,” she said.

The prayer initiative was started by the Awakening America Alliance nearly 10 years ago and has recently been entrusted to the national Day of Prayer Task Force, Cogan said.

South Point’s gathering came about as the result of village resident Susan Burck, who attended a council meeting and requested the event, which Mayor Jeff Gaskin and council embers agreed to.

“I was hoping we could get back into worshipping God and praying for the country,” Burck said, noting that similar events used to occur in the village for the National Day of Prayer in the spring.

Burck said she requested the event and it was organized by Cogan and Terry Wagner, the pastor of Tri-State Worship Center.

Wagner opened the event by singing the national anthem. He was followed by a prayer from Jerry Greenslait, pastor of South Point Christian Church, who asked for unity in the nation.

Wagner then prayed for security of the nation and Americans across the world.

“We need you to come heal our land and provide us security and protection,” he said.

He was followed by Trent Carpenter, of Cross Community Church (C3), who asked for the protection of first responders and military personnel.

“We pray for the people who protect us,” he said. “There are so many people who do so many things.”

The concluding prayer was offered by Bill Van Bibber, the chaplain for the village, who prayed for the community.

He also noted the work of first responders, locally and nationally.

Nearly 3,000 people were killed in the attacks 16 years ago, when hijackers from Al Qaeda, under the direction from Osama Bin Laden, hijacked four commercial airliners and flew them into the towers of the World Trade Center and the Pentagon.

One plane was brought down by passengers in southern Pennsylvania before reaching its target. The attacks led to the U.S. involvement in Afghanistan later that year.