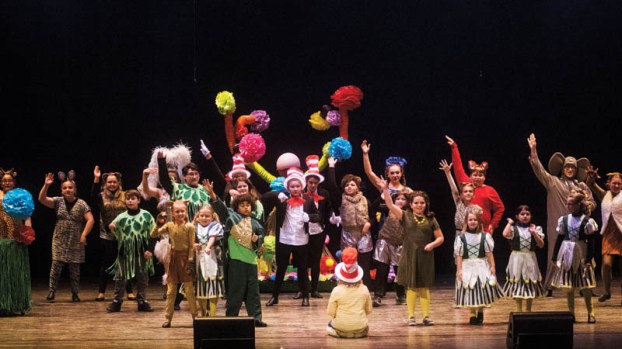 Members of the Paramount Kids program present its first production, Seussical Kids, to the Paramount Arts Center. Combining the favorite characters of Dr. Seuss the Paramount Kids take you to the Jungle of Nool, Circus of McGurkus, Cat in the Hat and tells the story of Horton Hears a Who.

The Paramount Kids program present “Seussical Jr.,” featuring a cast of 25 children from the theater’s classes.

Amy Nolan, the director of the musical, said it was a condensed version of the 2000 production “Seussical,” which features an adult cast.

“It’s based on a variety of works by Dr. Seuss,” Nolan said. It’s about JoJo and the Whos and Horton the elephant saving them.”

She said the cast, which ranges in age from six to 16, have been working since Aug. 7 on the production, which ran about 40 minutes.

Nolan said this was her second show as a director at the Paramount. She previously helmed the production of Annie Jr. in the summer.

“It’s going great,” she said. “They’re a talented, hard-working bunch. They’re having a blast and a great time.”

Nolan said the next children’s production at the theater will be “Madeline’s Christmas,” set for Dec. 15-16, followed by a spring production of Shrek Jr., set for May 3.

For more photos from “Seussical Jr.,” check out this weekend’s focus page in The Tribune.