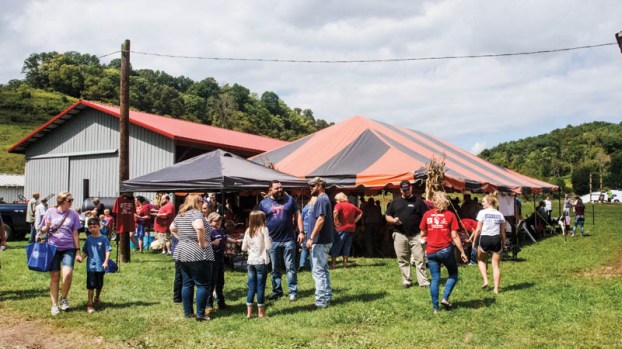 Local residents gather at the Pratt Dairy Farm, in Union Township, Saturday to take part in the Drive It Yourself Farm Tour.

Part of Drive It Yourself Farm Tour

Last week’s Lawrence County Commission meeting took place at Commission President Bill Pratt’s dairy farm on Saturday as part of the Lawrence County Drive It Yourself Farm Tour. The event was also part of the commission’s effort to provide meetings out in the county for more of the public to be able to attend.

Pratt thanked his family for helping him get the farm ready for the event, the Friends of Ironton for providing a tent, Commissioner Freddie Hayes Jr. and Clerk of Courts Mike Patterson for providing and helping serve pork and Chesapeake Save-A-Lot and Proctorville Kroger for their contributions to help with the cost.

Pratt also said that he was proud to be a part of the farm tour, and that the stretch from his dairy farm to his greenhouse is the only stretch in the county where all four food groups are produced.

As part of the agenda, the commission also proclaimed Saturday, Sept. 16, 2017, Frank Fuller day in Lawrence County. Hayes said he has known Fuller for a long time, and talked about him being a trustee in the county for more than 40 years.

“He’s not doing well right now, but he deserves this,” Hayes said. “He’s been in the public light for a long time.”

Commissioner DeAnna Holliday also mentioned that she and Hayes have been working to get Pratt recognized for all of his work on the dairy farm, and even reached out to the U.S. Secretary of Agriculture Sonny Perdue during a recent trip to the White House.

Although they haven’t heard anything back yet from Perdue, Holliday and Hayes presented Pratt with a certificate of recognition from the county.

• Rejected the bid submitted by A-1 Tree Care, Inc. for Section “A” Alternate 1 (ODOT Tree Clearing) in the amount of $66,918.80 because ODOT funding could not be secured.

• Signed a Resolution where the 2017 FAA grant offer for tree clearing and design of the runway pavement and rehabilitation for ODOT matching grant application.

• Received and filed the correspondence from the Department of Rehabilitation and Correction regarding the jail staying on a ‘Status Jail’ until the next inspection.

• Accepted and signed the Agreement with Korda/Nemeth Engineering for the PID 103460 SHV Bridge Loading Project as requested by Lawrence County Engineer Patrick Leighty.

• Accepted and signed the PID 103460 SHV Bridge Rating Project Agreement with Pennoni. The project has been funded through the Federal Highway Administration and the Lawrence County Engineer.

A different kind of learning