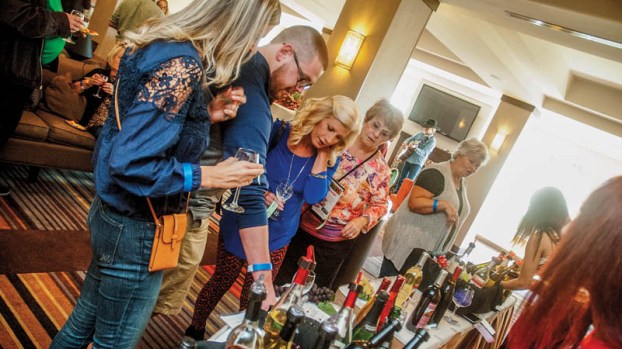 Eventgoers browse over a selection of wines from Ella Valley Vineyards during the Ohio River Wine Festival Saturday in Ironton.

Where the grapes meet the river

Ginger Gillenwater is the chairman of Ironton aLive, which put on the event.

“It went really well,” she said. “We had about 30 people come through the door in the first hour and it’s been steady ever since.

Ironton aLive decided to have the event to fill a gap on the Ohio River Valley Wine Trail, which runs from its namesake from Pennsylvania to Louisville.

“People like to go to different wine testing events and there was nothing here,” Gillenwater said. “So Mike (Pearson) came up with this idea about three years ago. It took off really well last year and this year is piggybacking on that success.”

One of the attendees, Louis Kelley, originally of Massachusetts and now of Pedro, came to the event because she had never been to a wine tasting before.

“I saw it in the paper and I’ve always wanted to come,” she said. “I really enjoyed it, sampling all the different vintages of wine. I really enjoyed, they had such a big selection.”

Ironton aLive chose wineries that are within a couple of hours from Ironton. That way if visitors liked wine, they could visit and be back the same day.

“The Ohio Wine Association had some representatives come down to serve the wine and talk about it,” Gillenwater said. The most popular was sangria. “It was pretty much gone in the first hour.”

She said there were attendees who came made a six-hour drive from Toledo for the festival.

“The leaves are changing in a lot of places this time of year, so people like to make the drive and try the wines,” Gillenwater said.

Ironton aLive executive director Sam Heighton said they would continue to do it.

“We think it will start growing,” he said. “Everyone I talked to complimented us on the wine we had. Everyone enjoyed themselves. The music was good, Wiley Dew fit right in.”

Mike Pearson, the Ironton aLive chairman of this event, said it went well enough that they were going to do it again.

“It went as well as expected,” he said. The money from the event goes towards next year’s Ohio River Wine Festival. “We just want to keep growing it, bring more people to Ironton for our events. We want to fill that gap on the Ohio River Valley Wine Trail.”

Pearson had the difference between the festival and wine tasting at a restaurant is that these wines come directly from the wineries.

The wineries can show off their best products directly to the public, rather than relying on restaurant’ taste maker’s choice.

Ironton aLive’s next event will be the Ironton Heritage Festival at 10 a.m.-5 p.m. on Oct. 14. It is an artisan craft and car show at the Ironton Farmers Market.