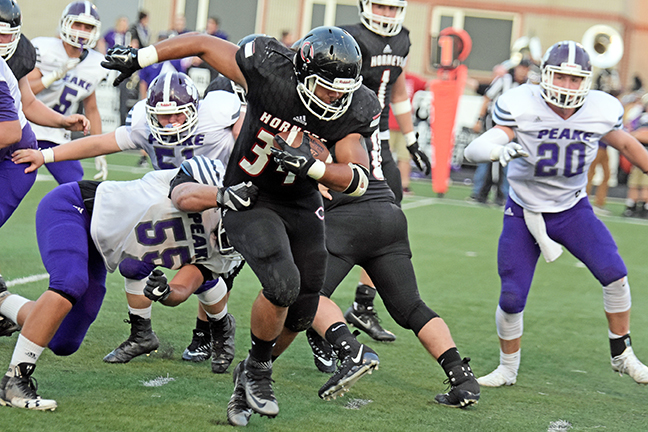 COAL GROVE — The final push isn’t going to be easy.
The Coal Grove Hornets are sitting 5-1 on the season, sixth in the Division VI Region 23 computer rankings and, oh by the way, unbeaten in the Ohio Valley Conference through three games.
But first-year head coach Evan Ferguson is only looking at this week’s game at Gallipolis against the Blue Devils and ignoring the final three games against Ironton, Fairland and Rock Hill for now.
“There’s nothing more true right now than focusing each week on the team at hand,” said Ferguson. “All the games are tough and this week we’re on the road. Winning on the road is always tough.”
Coal Grove’s defense will get a test against the high-scoring Blue Devils’ offense led by junior quarterback Justin McClelland (6-1, 195) and junior running back Jacob Campbell (6-0, 195).
“Campbell is a really hard-nosed runner. Having him gives them an extra edge of what they want to do,” said Ferguson.
“Their quarterback has a high football IQ. He’s hard to rattle. He seems to be in control.”
McClelland has a plethora of receivers as targets including junior Cory Call (6-1, 160), seniors Garrett Burns (5-10, 160) and John Stout (6-1, 185), and sophomore Cade Roberts (5-11, 200).
Regardless, Ferguson believes McClelland holds the key for the Blue Devils.
“They have a good scheme and their quarterback is in control. He’s very patient in the pocket and moves well and doesn’t turn the ball over,” said the Hornets’ coach.
Gallipolis (3-3, 1-2) has been scoring on offense but the defense is also allowing a lot of points, too.
“They do have some quickness, but if we can block them, we’ll be able to move the ball,” said Ferguson.
Coal Grove has shown some offensive punch of its own this season led by running backs Nate Harmon and Kyle Sites. Corey Borders shares the quarterback duties with Harmon and they have good targets in Sam Angelo and Jeb Jones.
Ferguson said it’s been a team effort creating the Hornets’ success as exemplified by senior fullback Kimo Baldwin.
“I feel like moving Harmon around has opened it up for him. He’s been a big player for us. He’s able to control the game more this way,” Ferguson said.
“We’ had other guys step up. We understand the team concept. Kimo has come a long way since the beginning of the season. He had some injuries in the summer and he’s getting healthy now and doing a good job.”
One area that was a major question mark before the season has helped ease Ferguson’s worries and enabled the offense to perform if the offensive line.
“The offensive line has progressed. We made some personnel changes. The seniors have stepped up like I had hoped they would,” said Ferguson.
Kickoff is 7 p.m.