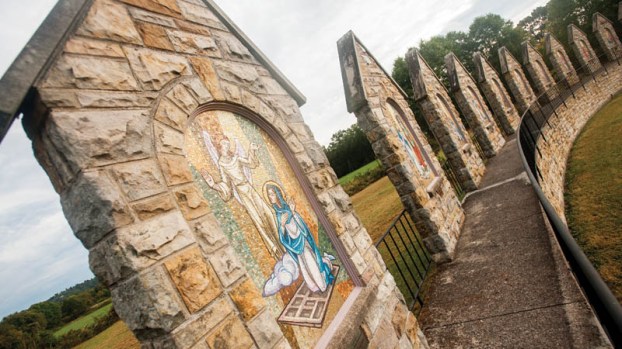 The Lady of Fatima Shrine located off U.S. Route 52, west of Ironton.

Ironton and Lawrence County’s Catholic community will be hosting a special week of events starting on Saturday.

This year marks the 100th anniversary of, according to church traditions, the Marian apparitions in Fatima, Portugal, in which three shepherd children at the Cova da Iriam, beginning in the spring, reported the appearance of an angel, followed by the Virgin Mary, whom they described as “the Lady more brilliant than the sun.”

According to the children, Mary appeared to them, at the height of World War I, for six consecutive months, each time on the 13th, asking them to say the rosary every day to bring peace to the world, and to offer up prayers and sacrifices for the conversion of sinners.

The reported apparitions continued until Oct. 13, 1917, which became known as “the Miracle of the Sun.”

To mark the anniversary, Huffman said St, Joseph Catholic Church will be taking part in “perpetual adoration” of Mary, 24 hours a day, beginning at 6 p.m. Saturday.

“The rosary will be said every hour and there will be special masses,” he said.

Additional processions, confessions and Divine Mercy Chaplets are scheduled for the week.

He said the week-long observation will culminate at 6 p.m., Friday, Oct. 13, with a special mass at the Fatima Shrine, located off U.S. Route 52, eight miles west of Ironton.

The shrine was built by Father L.A. Phillips, who was the priest at St. Lawrence O’Toole Church in Ironton. After visiting the Fatima shrine in Portugal, Phillips decided to create one in Lawrence County for people to stop and pray.

Funded from free will offerings, the shrine is on a high mall, on which stands a statue of Mary and the three kneeling children. Surrounding Our Lady is a circular reflecting pond, concrete walkway and wrought iron fence.

In the rear is a series of 15 mosaic Shrinettes, 10 feet high and five feet wide, representing the 15 mysteries of the rosary, each in memory of a particular person or family.

Catholics worldwide will host special services for the anniversary. Pope Francis has declared 2017 as “the Jubilee Year of Fatima.” The two youngest visionaries, Jacinta and Francisco Marto, were canonized by the Pope on May 13, making them the Catholic Church’s two youngest saints who did not dies as martyrs.

Ironton Municipal Court Judge Clark Collins said that the raises to court employees are not costing the taxpayers anything. Last... read more