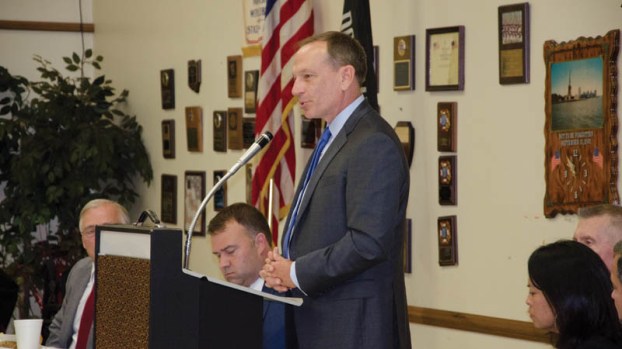 Lawrence County Municipal Court Judge Donald Capper has announced that he intends to run for the Lawrence County Common Pleas Court judge position that will become open in 2019.

Capper, speaking at Thursday night’s 2017 Lawrence County Democratic fall dinner, said he picked up petitions that morning to run for the seat in the 2018 election.

Having served in his current position for 27 years, he is seeking to fill the seat, which will become open as Charles Cooper is barred from running again due to reaching mandatory retirement age.

Capper, who began collecting signatures for the run at the dinner, said he had values instilled in him from a young age by his parents, who were staunch Democrats.

“They believed the working class are the backbone of this country,” Capper said. “They fight our wars and they pay our taxes.”

Capper said making sure those people were taken into consideration by the court would be a top priority.

Also announcing a 2018 run at the dinner was Robert McCollister, who is seeking a seat on the Lawrence County Commission.

Coming from a background in education and having served as the head coach at Rock Hill High School, he said the county is in need of “inspirational” leadership.

He said, while Lawrence County has been battered by recent trends,” he is “an optimist at heart.”

He said he intends to tackle the opioid crisis, and wants the county to take leadership on economic trends.

One example he cited was combatting climate change, which he said could lead to economic opportunities in the form of “clean energy” businesses.

He said he would seek to bring those businesses to the county.

“Just once, I want to see us in Lawrence County on the cutting edge of transition,” he said.

SOUTH POINT — The South Point Board of Education hosted a special meeting on Wednesday to discuss the subject of... read more