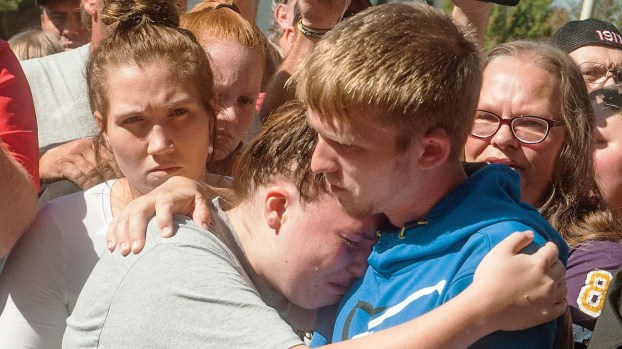 Brooke McCain embraces Brandon McGuire, as she breaks down in tears, while surrounded by family during a press conference dealing with the apprehension of multiple murder suspect Aaron Lee Lawson outside the Lawrence County Courthouse in Ironton on Friday.

Says cousin may have been ‘obsessed’ with Jackson

There were many tears and anger as the family members listened to Lawrence County Jeff Lawless as he described the capture of the man, their own cousin, accused of the murder of their mother, father, sister and nephew.

Arron Lee Lawson, 23, of Pedro, was captured Friday morning after two days on the run. He has been charged with three counts of murder and one count of aggravated murder in the gunshot deaths on Wednesday afternoon of husband and wife Donald McGuire, 50, and Tammie L. McGuire, 43, both of 15830 State Route 93, Pedro, Stacie M. Jackson, 25, and her son, Devin Holston, 8, of 15497 State Route 93, Pedro. The murders happened at a house trailer at 15497 State Route 93.

“I can’t believe he’s gone,” said Brandon McGuire, the son of the Donald and Tammie McGuire, and Jackson’s half-brother. He said Lawson lived near their homes.

“He would constantly want go to my sister’s house,” said Brooke McClain. “I think he was kind of obsessed with my sister. I don’t know why he would kill all of them.”

“I think the whole county is wondering why,” he said, adding his father was a fair person who loved to do things with his family. “I can’t stand to be going through life without him. My mother…she meant a lot to all of us. I just can’t grasp the fact she is gone either. My mother was kind, she was a sharing person. She would help anybody. I don’t see why anybody would take her away from all of us. That’s family. You don’t go and kill family.”

Lisa Jackson said that they watched television to follow what was going on, adding that the past couple of days had been awful.

“But I still can’t get over that I can’t call them any more,” she said, breaking into tears and sobs.

McGuire said he couldn’t get over that they are gone.

“It has been complete hell on me,” he said. “I’m kind of shell-shocked.”

When asked if he had any words for Lawson, he replied, “I don’t think you want to know.”

“You don’t want to know what we want to happen to him,” McClain said, adding she was happy that Lawson had been captured.

Jackson said that she was ecstatic that he had been caught.

“I was paranoid,” she said.

She said she went out and looked for Lawson.

“Because I wanted him to be in here,” she said, referring to the jail.

The Rock Hill High School Friday night football game is back on, following the arrest of a triple murder suspect... read more