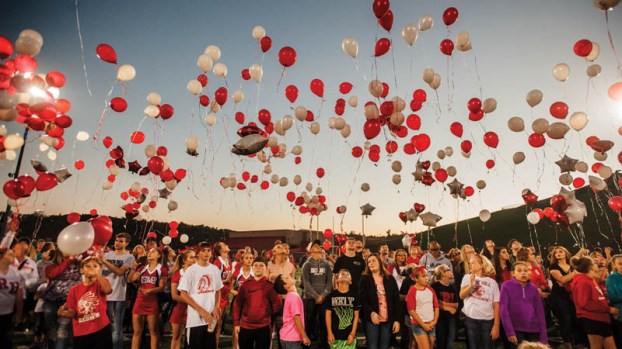 At Friday night’s Rock Hill football game, members of the community released red and white balloons in honor of second-grader Devin Holston, who was murdered Wednesday.

Rock Hill schools honored victims of a quadruple murder in the Decatur Township area with a prayer and memorial balloon launch at Friday’s football game with Gallia Academy
Schools in the district had been closed for two days due the manhunt for the suspect in the killings and, for many, it was the first opportunity to gather and reflect as a community.

Prior to the launch of the balloons in the schools’ colors of red and white, Brian Long, pastor of United Baptist Church at Kitts Hill, asked those in attendance to pray for “our Decatur family” and gave thanks to law enforcement.

“For us, life goes on,” he said. “We will recover and we will come out of this stronger.”

Todd Holston, who was wounded in the attack which claimed the lives of his wife, son and parents-in-law, was present and spoke of his gratitude.

“I want to thank everyone for their support,” he said. “It really means a lot to see this community come together for my family.”

Students are expected to return to class on Monday, superintendent Wes Hairston said, where they will be mourning Devin Holston, 8, who was a second grader at the district’s elementary school.

“He was a well-liked young man,” Hairston said. “It’s going to be difficult.”

He said the school would have grief counselors available to students to help them cope with the loss of their classmate.

He said police had helped to keep the community safe.

“I’m proud of the job law enforcement and other agencies have done,” he said of the past two days.

The sheriff had praised the school for its cooperation in the search.

Holston’s body was found Thursday morning at the residence.

The football game was initially cancelled, due to the manhunt, but was back on, following the arrest of Arron Lawson on Friday morning.

At the entrance to the field, the Rock Hill Athletic Boosters and Rock Hill Football Moms were collecting donations, under a balloon reading “DevinStrong.”

She said those interested in donating can look her up on Facebook or send a check to Rock Hill Athletic Boosters, 96 Private Drive 1279, Ironton Ohio 45638.