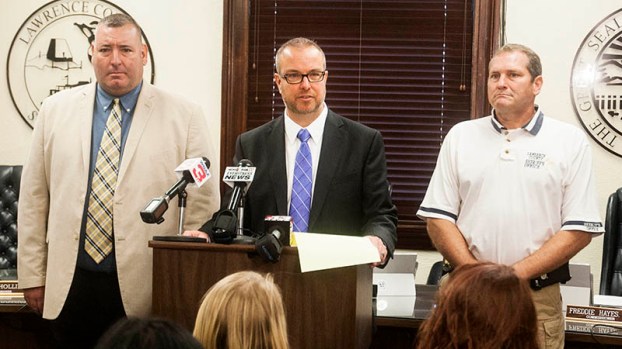 Lawrence County Prosecutor Brigham Anderson (center) gave a press conference Wednesday afternoon in the Lawrence County Commission office on the case against suspected Decatur Township quadruple homicide killer Arron Lawson, 23, of Pedro. Lawson was indicted by a grand jury on Wednesday, and is facing 13 charges. Next to Anderson on the left is Sheriff's Detective Aaron Bollinger and Lawrence County Sheriff Jeff Lawless on the right.

“This indictment has four Aggravated Murder charges, with each count having four or more aggravating circumstances attached with the indictment,” Lawrence County Prosecutor Brigham Anderson said at a press conference Wednesday. “Because of the specifications, each count has a maximum penalty of death by lethal injection.”

The aggravated murder charges came from the killings of husband and wife Donald McGuire, 50, Tammie McGuire, 43, their daughter, Stacey Jackson Holston, 25, and her son, Devin Holston, 8.

According to the indictment, all of the Aggravated Murder charges had several specifications, which included Gun, meaning that Lawson allegedly had a firearm while committing the offense and displayed, brandished, indicated he had it, or used it to facilitate the offense;

Course of Conduct, meaning that he allegedly purposefully killed or attempted to kill more than two people;

Murder to Escape, meaning that he allegedly committed the offense with the purpose of escaping detection, apprehension, trial or punishment for another offense committed by him;

and Murder to Prevent Witness Testimony, meaning that the victim of Aggravated Murder was allegedly a witness to an offense and was purposefully killed to prevent the victim’s testimony in any criminal proceeding.

The Attempted Murder charge alleges that Lawson did purposefully or knowingly, and when purpose or knowledge was sufficient culpability for the commission of an offense, engage in conduct that, if successful, would constitute or result in the offense of Murder.

The Felonious Assault charge alleges that Lawson did knowingly cause or attempt to cause physical harm to Todd A. Holston by means of a deadly weapon (knife).

The Aggravated Burglary charge alleges that Lawson did, by force, stealth or deception, trespass in an occupied structure or in a separately secured or separately occupied portion of an occupied structure, when another person other than an accomplice of the offender was present, with purpose to commit a criminal offense and that he had a weapon under his control.

The Rape charge, which also has a gun specification on it, alleges that Lawson did engage in sexual conduct with Stacey Jackson Holston when he purposefully compelled her to submit by force or threat to force.

The Abuse of a Corpse charge alleges that Lawson, without being authorized by law, did not treat a human corpse in a way that would outrage reasonable community sensibilities.

The Kidnapping charge, which also has a gun specification, alleges that Lawson, did by force, threat or deception, or by any means, removed another from the place where the other person was found or restrain the liberty of Devin William Andrew Holston, a child under the age of 13, to inflict serious physical harm on the victim.

The Theft of a Motor Vehicle charge alleges that Lawson, did, with purpose to deprive the owner of property or services, knowingly obtain or exert control over said property, a 2001 Chevrolet truck, without the consent of the owner or person authorized to give consent.

The Failure to Comply with the Order or Signal of a Police Officer charge alleges that Lawson did operate a motor vehicle so as to willfully elude or flee police after receiving visible or audible signal to bring his motor vehicle to a stop.

The incident took place Wednesday of last week with a manhunt ensuing for Lawson.

“…Approximately 36 hours later, law enforcement apprehended the suspect, and the investigation is continued,” Anderson said. “I want to thank Sheriff Lawless and Chief Investigator Aaron Bollinger, and all Lawrence County law enforcement who assisted with the capture of the defendant.”

Anderson added that the manhunt included every law enforcement agency in Lawrence County, and in addition, by last Friday morning, had more than 100 law enforcement officers from the states of Ohio, Kentucky and West Virginia, with the federal government assisting as well.

“The dedication and cooperation among the law enforcement officers was absolutely astounding, and I am so impressed that I can not explain how these law enforcement officers banded together under the direction of Sheriff Lawless and captured this individual,” Anderson said. “I also want to thank the members of the community. What I’ve witnessed in the last week of how our community has come together for the victims of this crime, for the victims’ families and for the community as a whole, it’s so impressive. I am absolutely honored to be a Lawrence County resident.”

Anderson said that as prosecutor, his job is to seek justice and that that’s exactly what he is going to do.

He added that this still an active investigation, and that details will be brought to the public through court filings and testimony in court.

Lawson, who is represented by attorney Warren Morford, is scheduled to be arraigned in Lawrence County Common Pleas Court at 10 a.m. Friday.